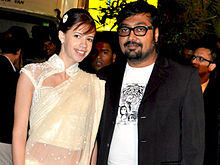 Anurag Kashyap and Kalki Koechlin at the Filmfare Awards

Kashyap went to school in his native Gorakhpur and later attended Scindia School in Gwalior . At a young age he was already interested in films. After leaving school, he studied zoology at the Hansraj College in Delhi . After graduating , he joined the Jana Natya Manch theater group , which often performed on the street. He later moved to Mumbai with the hope of a career in the film industry . For lack of money, he had to spend the night on the street or in hostels and initially joined a theater group where he was responsible for the stage performances. The performances could not celebrate a success and Kashyap got depression from this misery . It was not until the drama Main , which he wrote , that he was celebrated at many university festivals.

Now the film industry became aware of him. In his early days in film, he wrote screenplays for films like Satya and Kaun? and won several script awards. Kashyap achieved particular fame in India in 2004 with his scandalous film Black Friday . He became internationally known for his films Ugly and Gangs of Wasseypur , for which he won several awards.

His many gangster films try to keep a realistic background. Drug and alcohol abuse, depression and self-harm are also often discussed.

In 2009, Kashyap started his own film production company.