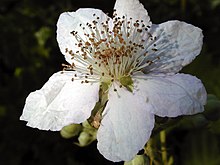 The Armenian blackberry , also garden blackberry , (scientific name Rubus armeniacus ), is a species of blackberry (genus Rubus , section Rubus ). The species is popularly grown in the garden in several varieties and is an important source of tasty blackberries . Their natural range is unclear, most likely the Caucasus region. Today it is considered an invasive neophyte in numerous regions . The species is one of the most common wild blackberry species in many parts of Europe and North America.

Like all blackberries, Rubus armeniacus is a perennial pseudo-shrub with biennial shoots ("tendrils") that are produced by the perennial root system. As is typical for blackberries, the shoots (saplings) lignify in the first year and overwinter. Flowers are not formed on branched side shoots until the second year, after which the entire shoot dies. The highly branched shoots of the kind are hochbogig (the largest Brombeerart in Central Europe), they can be used Spreizklimmer up interweaves five meters in other woody plants. They grow freely in an arched manner and can take root at the top when they come into contact with the ground and thus spread vegetatively. They are angular with deepened, seldom flat sides, shiny and reach a diameter of 8 to 25 millimeters. They are initially green in color, often with red spiky bases, and when exposed to light, they can change color either partially along the edges or completely to wine-red. At first they are hairy, later almost bald. The strong spines are designed in the same way, about four to eight of them occur per 5 centimeter section of the stem. They have a broad base and are gradually narrowed, protruding and slightly inclined; their length is 6 to 7 (-11) millimeters.

The foliage leaves are five - fold palmately divided into individual leaflets and are strikingly two-colored; the upper side matt dark green, the lower side due to pressed hair (with inconspicuous protruding longer hairs) white to white-gray felted. Its terminal leaflets have a long stalk, it is broadly obovate to elliptical or rounded, with a truncated or somewhat heart-shaped base and at the apex with a long, slightly offset tip. Its edge is rough and serrated somewhat irregularly. The lower leaflets are only 3 to 6 mm long stalked. The petiole is about as long as the lowest leaflet, it is hairy and prickly. The stipules are narrow linear. The leaves are evergreen, they hibernate and fall off in spring when the fresh leaves emerge.

The inflorescence is extensive and strongly branched, with a truncated pyramidal shape. It is without leaves on the outside, the leaves begin about 5 to 10 centimeters below the tip, they are three to five parts and significantly smaller than the leaves of the vegetative arched shoots. Its axis is angular, felt-like and additionally protruding hairy, with a few glandular hairs. The flower stalks of the single flowers reach 7 to 14 mm in length, they are prickly with small spines (up to 2.5 mm long). The knocked back calyx is gray-tomentose hairy and glandular. The petals are pale pink in color, they are broadly elliptical and quite large with 14 to 20 millimeters in length. The numerous stamens are considerably longer than the pale pink colored pens , their stamens are slightly hairy. The fruits (the typical composite stone fruit of blackberries) are red when unripe and blue-black when ripe. They are big and tasty.

The original range of the species is unclear. The Armenian blackberry was described by Focke after plants from the Hamburg gardening trade, the origin of which was specified by Focke as "Armenia and the Caucasus countries". However, there are no documented wild occurrences in the (insufficiently researched) blackberry flora of Armenia and the Caucasus. Yuzepcuk suspected a closer relationship in the flora of the Soviet Union with Rubus ibericus from the area of Tbilisi in Georgia, but this was rejected as unlikely by the blackberry expert Heinrich Weber . According to the genetic data available so far, an origin from the Caucasus region, which has never been seriously contested, is very likely. Details on the occurrence of wild animals are not known, and finds from Iran that have been erroneously stated are also unproven.

Spread as an invasive neophyte 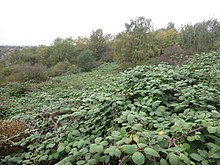 Mass population of Armenian blackberries in the Ruhr area

The species first appeared in 1837 in the Booth tree nurseries in Klein Flottbek , Hamburg-Altona, where it was sold as a garden plant. Because of its popularity with gardeners, it quickly became widespread as a cultivated plant. As a wild plant, it was hardly noticed for a long time, which is also due to the fact that the blackberries were little noticed by florists due to the abundance of shapes and the long confused taxonomy . In 1985, the species was reported as "scattered feral" in Westphalia, but in 2008 it was "widely spread" and much more common in the same area. In the Rhenish-Westphalian industrial area, where the spread of the species has been documented since 2000, it is now the most common wild blackberry species. Due to its height, the species can overgrow other blackberry species and thus displace them. This sometimes leads to mass populations on nature reserves. Due to its limited frost hardiness in the lowlands, especially in western Germany, the species is far more common than in the southeast, but is now found everywhere here. In Switzerland, the Armenian blackberry is listed as an undesirable invasive species on the “ Black List of Invasive Neophytes ”. It is believed to be widespread across the country, but actual evidence is only available from a few densely populated regions. The species is widespread in northeast France, but here still clearly restricted to synanthropic sites and the banks of rivers, it is currently considered to be unproblematic here.

The Armenian blackberry becomes rarer in Europe towards the south-east. In the Czech Republic it occurs only sporadically, near the Elbe. The first occurrence in Hungary was noticed in 1999, but the species has since spread in the northeast of the country, in 2014 over 100 occurrences were known. On the Balkan Peninsula, a 2014 find in Bosnia and Herzegovina is the first evidence ever. It penetrates further than other blackberry species into arid climatic areas.

The species was also found wild for the first time in South Africa in 2018, but is not considered an invasive species here.

In North America, where the species is known under the (misleading) name "Himalayan blackberry", feral European blackberries are feared as invasive neophytes in many regions. The distribution of the species is only provisionally given due to taxonomic problems. Here, as in Europe (here following Åke Gustafsson) it was often confused with the similar Rubus praecox (syn. Rubus procerus ) or with Rubus discolor and is listed in many flora under this name. Later it turned out that the widespread feral blackberries of North America actually represent not one, but two species; The second very similar species is Rubus anglocandicans A. Newton (originating from England) . This species is also very common in Australia, where Rubus armeniacus is strikingly absent. European blackberries ( Rubus armeniacus and / or Rubus anglocandicans ) form extensive thickets in the west coast states of California, Oregon and Washington of the USA and in British Columbia (Canada), as in Europe, which can also displace natural vegetation, and they are distributed in numerous other states. They can seriously hinder the regeneration of forest tree species that need light and reduce the yield of grazing land. The thickets also increase the risk of fire. As the host of the bacterium Xylella fastidiosa , the causative agent of Pierce's disease, they pose a threat to the Californian viticulture. The species thrives in the western USA up to 1,500 meters above sea level and thus rises far higher here than in Europe.

The species prefers nutrient-rich locations, it loves warmth and is somewhat sensitive to frost. It occurs equally on sandy and base-rich soils. In most of its range, it prefers man-made ( synanthropic ) locations, preferably within cities and settlements and along railway embankments. However, it can also occur far away in the field and also invades natural forests, where it can hinder regeneration. Overall, however, the species prefers open locations or forest edges, it only occurs in the undergrowth in very sparse forests. Due to its origin as a garden plant, there are many overgrown occurrences near allotments

The species is spread by birds via the fruits. However, it is usually more important that they are carried over by humans, for example with garden waste. Once established, bushes can last for decades, they then spread vegetatively via rooting arch shoots. The species easily survives a single mowing, it can even spread further through misguided control measures via cut pieces of shoot that take root.

Foliage and fruit cluster of the Armenian blackberry

The species is a popular garden plant because of its large, tasty fruits. The varieties “Theodor Reimers” and “Himalaya” are widespread. Numerous cultivated blackberry varieties go back to hybrids with the participation of the Armenian blackberry, including the "Marionberry", which is very popular in the USA.

The Armenian blackberry is rarely controlled as an invasive species in Europe. In the US, it is advised that neither cutting nor burning or putting in artificial barriers made of plastic can contain the species. Excavation of underground creeping shoots or herbicide treatment is recommended.