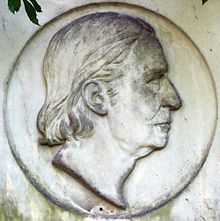 Marble tondo with a portrait relief on West's grave, created by Otto Geyer

August Detlev Christian Twesten (born April 11, 1789 in Glückstadt ; † January 8, 1876 in Berlin ) was professor of theology in Kiel and Berlin. He was a follower and successor of Friedrich Schleiermacher and father of the politician Karl Twesten .

Twesten was born as the younger son of a non-commissioned officer in Glückstadt. First he attended the scholars' school in his hometown. 1808 Twesten began studying philosophy and philology at Kiel University , but moved two years later to the newly founded Berlin University to there theology study. He was one of Schleiermacher's first students there and soon friends too. In 1811 he moved to Hamburg and gave private and home lessons. Before the French era in Hamburg , he fled to Berlin again and taught at grammar schools there, without losing sight of his academic career. Twesten wrote his dissertation in 1813 on Hesiod . In 1814 he received an extraordinary professorship for theology and philosophy in Kiel. His area of ​​responsibility included exegesis, logic and pedagogy. Together with three other young professors, Niels Nikolaus Falck , Carl Theodor Welcker and Friedrich Christoph Dahlmann , he founded the Kieler Blätter .

In 1816 Twesten married Catharina Amalia Margarethe Behrens , daughter of the lawyer and district administrator Siegfried Behrens in Husum. From this marriage there were five children, two of whom died as small children and Agnes as a young woman. The politician Karl Twesten was her son, but died childless before his parents. The only granddaughter, Ellen Wilkinson, daughter of the youngest daughter Lucie, became the first wife of Westens student and biographer Georg Heinrici .

In 1818 he received a call to the University of Bonn, which he refused. In 1819 he became an associate professor for systematic theology in Kiel , but continued to hold philosophical lectures. In 1826 he received an honorary doctorate from the Bonn theological faculty. In the same year he was made a knight of the Dannebrog . In 1830 Twesten took over the rectorate in Kiel before he was appointed to Berlin in 1834 as the successor to Friedrich Schleiermacher. Here he joined the lawless society in Berlin in 1835 . In 1841 he became a member of the consistory and in 1852 senior consistorial councilor. Twesten was university rector six times : 1830/31, 1850/51 and 1860/61 in Kiel and 1839/40, 1850/51 and 1860/61 in Berlin.

August Twesten died in Berlin at the beginning of 1876 at the age of 86. He was buried in a hereditary funeral in the Trinity Cemetery I in front of the Hallesches Tor . His wife Catharina Amalia Margarethe born. Behrens (1795–1878) found her final resting place there two years later. Six marble tablets on the plastered brick grave wall bear the names of the family members buried here. The panel for August Twesten has a relief tondo with the portrait of the deceased in profile, a work by the sculptor Otto Geyer .

See also : Members of the Royal Danish Academy of Sciences until 1942

The theological rationalism had already rejected his studies in Kiel Twesten. As a young professor he took part in a liberal newspaper and gave lectures on Kant . The logic served as auxiliary science of theology and philosophy, not as a "knowledge doctrine." With Claus Harms he was connected to the orthodox Lutheranism . Harms had come to Kiel through the mediation of West's father-in-law, to whom he was related. The saying went “Twesten converts his listeners and Harms then baptizes them.” But he was critical of the awakening movement .

Twesten wrote relatively few theological writings. He saw university teaching as his most important field of work. Outline of analytical logic from 1825 ( re-edited by Schopenhauer in 1834 ) and lectures on the dogmatics of the Evangelical Lutheran Church have outgrown his lecture activities. The first volume of Dogmatik , which was first published in 1826 , was West's main work, and by 1838 had four editions. The work remained unfinished. Twesten proves to be a mediating theologian with a clear turn to Lutheran orthodoxy . The monograph published in 1844 on the Gnesiolutheran Matthias Flacius Illyricus , whose work he paid tribute to, is also based on a lecture . In 1855, Twesten published the Compendium Locorum Theologicorum by Leonhard Hutter , a handbook of Lutheran teaching from 1610.