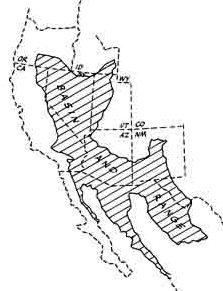 Extension of the Basin and Range Province

The Basin and Range Province is a very spacious geological province that encompasses large parts of the southwestern United States and northwestern Mexico . The determining geomorphological element are the Basin and Ranges (basins and ridges), which represent a topography of parallel clumps and ditches . 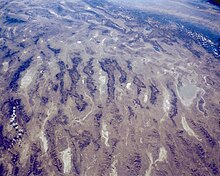 The Basin and Range Province of central Nevada. Walker Lake , Mono Lake and Sierra Nevada in the upper right corner

The province extends from the Colorado Plateau westward to the Sierra Nevada and encloses northeast Baja California to the south . On the US side, it extends over parts of the states of Arizona , Idaho , California , New Mexico , Oregon , Texas , Utah and practically all of Nevada (only a small part of northern Elko County drains to the Snake River ). On the Mexican side, the states of Baja California , Chihuahua and Sonora also have typical basin and range topography.

The longitudinal extension amounts to a total of 3000 kilometers, the southernmost point of the province is immediately north of Mexico City , Oaxaca itself may have been affected. The maximum latitude reaches 1000 kilometers, which, however, is reduced to only 350 kilometers at the latitude of Las Vegas .

The Sierra Madre Occidental divides the Basin and Range Province into two halves on the Mexican side.

As large landscapes, the arid Great Basin , the Chihuahua Desert and the Sonoran Desert largely belong to the Basin and Range Province.

The missing piece of mid-ocean ridge off the west coast of the USA was decisive for the extension.

Schematic representation of an eyrie and trench structure

The nest and trench topography of the Basin and Range Province results from crustal expansion . The Laramian orogeny , which created the Rocky Mountains , was initiated when the Farallon Plate plunged under the North American Plate from the west, generating pressure in a west-east direction. It ended around 35 million years ago when the Farallon Plate was completely subducted except for small fragments in the subduction zone on the west coast of North America. When the lateral pressure on the North American plate was eliminated, the previously compressed rocks were stretched. Parallel ridges were excavated on north-south trending faults, and at the same time rift zones sank in the same faults. In this way, the alternating pattern of straight ridges (ranges) and basins (basins) was created.

As early as 35 million years BP ( Upper Eocene , Priabonian ), the first flat-lying faults began with the stretching process of the tectonically thickened crust and metamorphic core complexes (bulges of the metamorphic lower crust) formed. However, the actual crustal expansion did not begin until around 16 million years BP ( Miocene , Langhium ), the direction of expansion was east-northeast. From the Upper Miocene ( Tortonian ) eight million years ago BP, a second phase in the expansion process took place with a clockwise change of direction to east-southeast, and the tectonic style also changed. Steep faults dominated the previous structures, and the current eyrie and trench structure emerged.

The fact is that the crust has expanded up to 100 percent in its original width dimension and is now one of the thinnest areas of crust in the world below the Basin and Range Province.

The Kingston Range in the Mojave Desert , California

Almost all of the copper and much of the United States' gold , silver and barite production come from the Basin and Range Province . Some oil is even produced in Nevada .