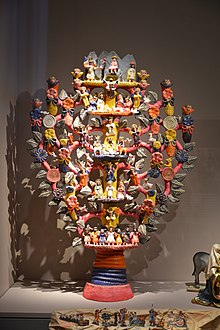 The tree of life ( Hebrew עץ החיים ° ez ha-chajjîm , Greek τὸ ξύλον τῆς ζωῆς, Latin lignum vitae ) is closely related to the tree of the knowledge of good and evil in the first book of the Bible , the Book of Genesis .

The tree of life in the Old Testament

According to Gen 2,9  EU of the Old Testament , God let the tree of life and the tree of the knowledge of good and bad grow in the middle of the garden in Eden . He forbade people to eat the fruits of the tree of knowledge, as this would result in the loss of life (2.17 EU ) or eternal life (3.22 EU ).

In Gen 3.3  EU , Eve depicts it in relation to the snake in such a way that one is not allowed to eat from the tree "in the middle of the garden".

When Adam and Eve - seduced by the serpent - had broken the divine commandment and ate the forbidden fruits, God drove man “out of the garden of Eden” (3.23 EU ), so that he “did not stretch out his hand now either takes from the tree of life and lives forever ”(3.22 EU ). This would have meant an eternal life. As guardians, God “set up the kerubim and the blazing sword of flames, so that they might guard the way to the tree of life” (3.24 EU ). The enjoyment of the fruits of the tree of life was therefore impossible for Adam and Eve.

The Book of Proverbs also refers to the image of the tree of life in four places to describe an extremely beneficial state: wisdom, righteousness, hope fulfilled and a "soft" tongue! (According to the revised Luther translation!): (Prov 3, (13-) 18; Prov 11.30; Prov 13.12; Prov 15.4).

The tree of life in the New Testament

In the last book of the New Testament and the Christian Bible, the Revelation of John , the image of the tree of life ( Rev 2,7  EU ; 22,2 EU ) as well as of the serpent of paradise ( Rev 12,9  EU ) is taken up again: this is taken up identified with the devil or the dragon "who seduces the whole world".

The last book of the New Testament thus relates the motif of the tree of life in the middle of the lost paradise, where the four streams of paradise ( Gen 2,10  EU ) also arise, as a Eucharistic symbol on Christ and connects it with the vision of the end-time paradise: “That Water of Life ”( Rev 22.1  EU ) and“ Trees of Life ”(22.2 EU ) become symbols of the abundance of life in a world perfected by God .

As in this perspective, the Eucharist the food from the tree of knowledge reverses and so the return to Paradise (hoping) allows, so do the means baptism as dying with and Mitauferstehen with Christ the recovery of paradise (see. Lk 23,43  EU ): In tightening Jesus Christ, the “new man who was created in the image of God in true righteousness and holiness” ( Eph 4,24  EU ), becomes the “garment of immortality” ( 2 Cor 5,2-9  EU ; cf. 1 Cor 15.53-54  EU ) dressed again and thus the animal "animal fur" ( Gen 3.21  EU ) that was given to man after the fall of man instead of the "light dress" in paradise.

The interpretation of the cross of Jesus (lat. Lignum crucis , "wood of the cross") as the tree of life (lat. Lignum vitae , "wood of life") has been iconographically documented since the 5th century and throughout the Middle Ages . The deadly tree of knowledge (“tree of death”) is contrasted with the life-giving cross (“tree of life”) in the sense of typology . B. in the form of a branch or tree cross from which branches, flowers, leaves, fruits or tendrils go out.

Liturgically, the motif of the tree of life is taken up in the Catholic Church at the beginning of the pre-Easter Lent and on the feast of the " Exaltation of the Cross " (14 September). The reading texts of the first Sunday of Lent relate the narrative of the fall of man to the story of the temptation of Jesus ( Mt 4,1-11  EU ) as well as to Rom 5,21  EU , where death and life are based on the disobedience of the first Adam and the obedience of the second Adam (= Jesus) to be led back. Thus, the whole pre-Easter period of penance is under the sign of Adam's fall into sin (breach of the covenant), who finds his healing and redemption in Jesus' "obedience until death on the cross" ( Phil 2.8  EU ).

This redemption already begins with the incarnation of the Creator's Word, which is why the Western Church sings at Christmas :

"Today he (= Christ) closes the door to the beautiful parade again, / the cherub no longer stands for (= in front of it) that God be praise, honor and praise."

In the Syro-Antiochene liturgy , the priest says to the person to be baptized at the first communion given at baptism: "The fruit that Adam never tasted in Paradise [namely the fruit of the tree of life] is joyfully placed in your mouth today." For Bonaventura , the tree of life is “in a sense the 'sacrament' of paradise”.

In Jewish and Christian mysticism , the tree of life is identified with the Torah in its spiritual understanding or with the cross and the crucified. Justin the Martyr (2nd century) says in a dialogue with the Jew Tryphon : “To him who had been crucified to come again in glory, as the scriptures show, the wood of life referred to mysteriously, which, as is reported, was planted in paradise, and the story of all the righteous. ”This righteousness does not follow from the fulfillment of the letter of the law, but from the hope of faith of his light and spirit, which aims beyond this finite world to the love unity with and in God.