This article describes the place Benthullen. The meteorite named after him is under Benthullen (meteorite) .

Building of the Evangelical Lutheran parish 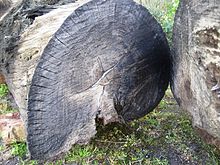 Benthullen is a village in the Wardenburg municipality in the Oldenburg district in north-western Lower Saxony .

The village of Benthullen was founded in 1934.

In 1933 Benthullen was still a swamp area. As a first step towards draining the area in which Benthullen is located today, trenches were dug. This was done by the voluntary labor service from the Saarland .

The Benthullen meteorite was found between 1944 and 1948. The exact date of discovery cannot be determined as the information on this varies. At 17.25 kg it is the second largest stone meteorite in Germany. It was formed 4.5 billion years ago and is one of the L- chondrites of group 6.

The Moor and Farm Museum has developed as a center of attraction for Benthullen . A provisional museum was set up in 1984 for the 50th anniversary of Benthullen's existence. Today's museum was founded on September 1st, 1997 and gives an insight into life in the past decades. Since 2013, an approximately 5000 year old oak, which was discovered in the moor of Charlottendorf-West, has been presented in the outdoor area of ​​the museum.

Places of the municipality of Wardenburg