The body of the boas is elongated and mostly cylindrical. In some tree-dwelling species, however, it is laterally flattened with a clearly depicted spine. The tail is short in relation to the body, it begins behind the sewer . In the tail of the males there are the paired hemipenes , in the females there are scent glands. The internal organs, especially the stomach, are very flexible. The head shape varies depending on the species. The head can be clearly separated from the neck without a visible transition. The upper and lower jaws are not firmly connected by joints. They are only held in place by two chopsticks, which are surrounded by elastic bands, and are held by them. This structure enables the two halves of the jaw to be notched. Some genera have heat-sensitive labial pits that are located in a row of scales along the upper and lower lip. The eyes have no lid and the pupil is slit vertically. Fragrances absorbed by the tongue are released into two indentations on the palate. From there there is a connection to the brain. This organ is called Jacobson's organ after its discoverer . Boas have no hearing, but vibrations in the lower jaw are perceived and transmitted through the stirrup.

Both of the boas' lungs have been preserved. In most other snakes, however (e.g. the snakes ), the left lung is strongly reduced, while the right lung is elongated. The rear section is designed as an air reservoir so that the supply of breathing air is ensured from there during the slinging act. In Boas this "reservoir" is not very well developed and can only absorb a little air.

Besides the cloaca are as rudiments of hind limbs , the pelvic spur visible, continue the family, in this still remains pelvic girdle present.

The boas family includes some of the largest snakes living. The largest species can sometimes be over five meters long, such as the great anaconda , while other species remain much smaller.

Some species of sand boas only weigh a few hundred grams when fully grown. In contrast, the largest species can sometimes significantly exceed 70 kilograms as adults .

Within the reptiles (Reptilia), the boas (Boidae) are kept in the most species-rich order, the scalloped crawfish (Squamata). There they are placed in the subordination of snakes (Serpentes) and there in turn in the large group of so-called real snakes (Alethinophidia), which essentially still includes the adder-like and viper-like (Colubroidea).

Traditionally, the Boidae contained as the family of giant snakes due to similar physical characteristics in addition to the Real Boas (Boinae) and sand boas (Erycinae), the Pythons (Pythoninae). These Boidae were in turn in the superfamily of the giant snake-like (Booidea or Henophidia).

Molecular genetic studies carried out from the 2000s onwards, however, disprove a direct relationship between pythons and boas. In conclusion, the systematics of snakes has not yet been clarified, but the results of several investigations agree that the closest relatives of the pythons are the pointed head pythons (Loxocemidae) and earth snakes (Xenopeltidae), while the closest relatives of the real boas and sand boas are also the dwarf boas belong. As a result, the concept of the Boidae as giant snakes was abandoned and the pythons were raised to the rank of an independent family (Pythonidae).

After further molecular genetic investigations, the subfamilies of the Boidae were reorganized and some groups were established or re-established. In 2013 Pyron, Burbrink and Wiens re-created the subfamily of the Pacific boas (Candoiinae) for the genus Candoia and reestablished the subfamily of the Madagascar boas (Sanziniinae) with the genera Acrantophis and Sanzinia . The genera Lichanura and Charina were transferred from the sand boas ( Erycinae) to the dwarf boas (Ungaliophiinae). As a subfamily, the sand boas only include the real sand boas of the genus Eryx . Due to the inclusion of the genus Charina in the Ungaliophiinae, their name became a synonym after the ICZN , since Charina is the first described genus. The subfamily was therefore renamed Charininae. However, this name has already been given for a subfamily or family of flagellated spiders . Following a proposal by Pyron, Reynolds, and Burbrink, these flagellum spiders should be renamed Charinusidae.

Subdivision of the boas (Boidae) based on recent genetic studies (according to the Reptile Database ):

In 2014 it was proposed that the subfamilies of the Boidae should all be elevated to independent families.

The range of the boas is mainly in the New World , in North, South and Central America as well as in the Caribbean . There are also species in Africa and Madagascar , Asia and the Solomon Islands and other Pacific islands.

Boas have been adapted to very different habitats in the course of evolution . Most of the species in this family need a more humid climate ; they have found their habitat in temperate zones , the subtropics or, for example, the green tree python , in the tropical rainforests . In cooler areas, where the temperature drops sharply in winter, the animals lapse into so-called cold rigidity . On the other hand, some species live in dry, warm areas up to sandy deserts . The mostly small animals bury themselves there during the day to avoid the extreme heat.

Unlike most other snakes, the boas have no sex difference in body size when the snake reaches sexual maturity. In other snake species, the male is typically sexually mature earlier. Nevertheless, there are species in which the female boas are on average larger than the males.

The pythons lay eggs ( oviparous ) while the boas are viviparous ( ovoviviparous ). The females of some species take care of the brood. They put their body loops around the clutch and incubate the eggs in two to three months. During this time, the temperature inside the clutch rises above the air temperature. If it becomes too high, the female loosens the loops and lets air to the eggs. Other species only guard the clutch. 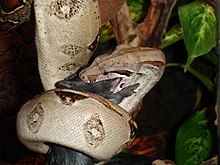 The boas kill their prey by entangling them, which is why they are also known as strangler snakes . They wrap their prey with their strong body muscles until it dies of cardiovascular failure . Contrary to a decades-old myth , the bones are neither broken nor the victims suffocate. The victim is then swallowed whole.

The prey animals of the boas are mainly mammals and birds. Large prey that exceed the size of the snake can also be devoured. Snakes do not have bladders. Urine and feces are excreted through the cloaca . A highly concentrated hydrochloric acid solution forms the gastric juice of the boas, it also dissolves large prey after a few days. The bones are also digested, only the teeth, hair and claws are excreted.

Importance for the trade

The trade in live specimens and the hides of the boas is important worldwide, which is why the entire family was protected. Despite all protective measures, hundreds of thousands of hides (shoes, etc.) and many live specimens are still confiscated by the authorities at airports and from smugglers. Since adult specimens of some species can grow to be several meters long, trade in these is usually limited to young animals. In many Asian and African countries, the snakes are also killed for their own meat consumption.

All representatives of the boas were included in the Washington Convention on Endangered Species . Five species are listed in Appendix I, the remaining species have been included in Appendix II. The boas that fall under the highest protection of Appendix I and thus the trade ban are: