Boston Dynamics is a robotics - companies based in Waltham (Massachusetts) that especially in the field of autonomous mobile robot research and development, at the beginning of the American US military . It is considered to be one of the most advanced robotics companies in the world.

Boston Dynamics was founded in 1992 as a spin-off from the Massachusetts Institute of Technology by Marc Raibert , who is considered the father of walking robots in the United States. Originally, simulation software was also developed in addition to robotics systems. The company has earned an international reputation for its walking robots, including the development of the dog-like walking robot BigDog from 2005 or from 2012 with its cheetah-like walking robot Cheetah , which sets itself apart from previous models thanks to its balanced and very fast gait. DARPA has already examined such concepts under the name Mobility Environmental Research Study.

In April 2012, the Defense Advanced Research Projects Agency (DARPA) announced that Boston Dynamics would be the only provider to supply the robotic systems for the next DARPA Robotics Challenge . With a contract worth $ 10.8 million, Boston Dynamics is set to supply a series of humanoid robots called Atlas for the two-year competition with $ 2 million in prize money. The aim of the competition is to create autonomous robots to work in natural disasters and catastrophes such as the Fukushima nuclear disaster .

The Autonomous Robotic Manipulation ( ARM ) project , in which autonomous robotic systems ( military robots ) are to be developed in order to relieve people, for example in defusing bombs, clearing mines, rescuing the wounded and servicing, belongs to the field of military research and development Weapon systems. Armed systems are also conceivable.

Boston Dynamics was acquired by Google in late 2013 .

Shortly before this takeover, DI-Guy , software for simulating crowds for military tactical planning, was taken over by the Boston-based company VT MÄK , which specializes in simulation software.

According to media reports, Alphabet Inc. (formerly Google) planned to sell Boston Dynamics to Toyota in 2016 because no products were expected to be marketable for Alphabet.

On June 9, 2017, the sale of Boston Dynamics to the Japanese telecommunications and media company Softbank was announced. 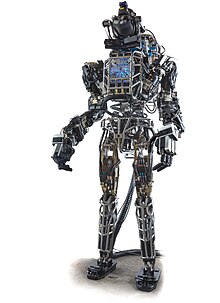 Planned improvements are that the machine can be used more militarily due to its higher stability. This also includes the ability to traverse bodies of water and to cope with hot, cold, dry and dirty environments. In contrast to the previous model, the volume of the drive is to be reduced from around 95 to 70 decibels in normal mode and 40 decibels in a second, quieter mode. The previous payload of around 150 kilograms is to be increased to a possible payload of around 180 kilograms.

Cheetah was first released in 2012. It is another four-legged, cat-like walking robot whose musculoskeletal system was modeled on a cheetah and whose development focuses on a fast running speed. Currently (as of December 2013) the machine reaches a top speed of over 46  kilometers per hour (29  mph ) and already in 2012 (at 29 km / h) it reached a new peak value for running machines, which normal sports people could no longer escape. For comparison: the Jamaican sprinter Usain Bolt reached a top speed of almost 45 kilometers per hour over a distance of 100 meters in 2009.

Wildcat (2012) is intended for use in different terrain. Two different gaits are considered special: galloping and rabbit-like hobbling. The machine reaches a top speed of almost 26 kilometers per hour on a flat stretch. An internal combustion engine serves as the energy supply.

Handle (2016) has two arms and, as a novelty, two legs that run on wheels. The arms are used to balance and lift loads of up to 45 kilograms. Handle is two meters tall and can roll at more than 15 kilometers per hour. He can also walk on rough surfaces. He can negotiate stairs rolling downwards. He can jump more than four feet high. Its batteries allow a range of around 25 kilometers. Because of the wheels, it has fewer degrees of freedom than a humanoid robot with movable feet, but it is significantly more cost-effective to manufacture.