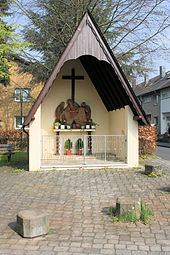 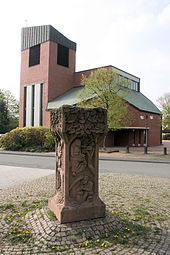 Buisdorf [ ˈbuːsdɔrf with Dehnungs -i ] is a district of Sankt Augustin in the North Rhine-Westphalian Rhein-Sieg district . The district mayor of the district has been Bernhard Müller since October 2009 and the successor to Regina Ridder-Krause, who has held this office since March 2008.

Buisdorf is located in the east of the city, immediately south of the border with the district town of Siegburg and on the left the Sieg . The city district is divided into a larger northern and a smaller southern part by the victory route . Until 1969 Buisdorf was an independent municipality .

Due to the favorable soil conditions to the north and south of the Sieg, the area surrounding today's district was already populated in prehistoric times . This is indicated by the finds of graves with additions from the period 1000 to 150 BC. Chr. For the Franconian period and the Middle Ages , however, settlement can only be proven around 500 AD. The oldest known documentary mention as "Bodestorp" comes from 722/723.

The Michaelsberg Abbey , consecrated in Siegburg in 1066, gave Buisdorf the status of a border town under a “castle ban” around the Siegburg monastery. When Emperor Friedrich I registered his possessions in the Siegburg Monastery on May 9, 1174, today's Buisdorf belonged to the Abbot of Siegburg with the tithe levy and jurisdiction . After the Siegburg Abbey lost its imperial immediacy in 1676 and went to the Duchy of Berg , Buisdorf had to give his tithe to the Niederpleis Church.

When cattle died out in 1754, almost the entire animal population fell victim. When the plague ended in autumn of that year, a cross was erected in honor of St. George on April 23, 1755 .

The Sieg was first built over with a wooden bridge by Theodor von der Pfalz in 1772 . The ferry service only stopped when a stone bridge was opened on February 10, 1855.

The ownership structure in Buisdorf and the surrounding area changed suddenly when the Siegburg Abbey was dissolved in 1803. Large parts of the area went into private ownership. Due to severe flood damage, the Buisdorf community built the first protective dikes in 1843 , which were reinforced and repaired in 1880. In 1858 the construction of the Cologne – Frankfurt railway caused the construction of another bridge over the Sieg in Buisdorf. The Siegbrücken existing at that time were destroyed in the Second World War and later rebuilt and widened.

Buisdorf has belonged to the Menden mayor since the beginning of the 19th century . In 1885 the municipality of Buisdorf had an area of ​​441 ha , of which 252 ha were arable, 28 ha were meadows and 44 ha were forest. In 1885 the community Buisdorf had 144 residential buildings (with uninhabited and two inhabited cars) and 151 households with 716 inhabitants (363 men, 353 women). In 1885 there were 689 Catholics in the parish, who were supplied by the Niederpleis parish . In addition, there were 27 citizens of Protestant faith who were looked after by the parishes of Seelscheid and Siegburg .

The municipality of Buisdorf gave the district Deichhaus on the right of the Sieg to Siegburg in 1927.

Buisdorf's development accelerated in 1936 with the construction of the Reichsautobahn from Cologne to Frankfurt (today's A3 ) with a junction on the edge of Buisdorf. It received further impetus with the decision on the capital issue for Bonn, which is only a few kilometers to the west . After the Second World War, numerous small and medium-sized companies emerged and the population grew - also due to the settlement of federal authorities in the region. As in the whole of Sankt Augustin, the rural image has changed and now has more of an urban character.

As part of the municipal reorganization of the Bonn area ( Bonn law ), Buisdorf became part of the newly founded municipality and today's city of Sankt Augustin on August 1, 1969 .

In the traditions, Buisdorf Bodestorp , Boitzenloh , Boitzendorf , Botzdorf , Boisdorf and Busdorf are mentioned. This group of names is translated as “Hof im Walde”, due to the fact that the entire Siegniederung valley is covered with forest and bushes. When the area was cleared, the place Buisdorf was created. The street names "In den Eichen", "In der Bitze", "Im Forst" and "Am Buschberg" refer to this time.

The Buisdorf St. Georg Church as a branch church of the parish St. Martinus was consecrated on December 11, 1976. This was preceded by the foundation of a church building association in 1975 and the laying of the foundation stone on December 7th of the same year.

Buisdorf is located immediately north-west of the “Siegburg / Bonn” motorway junction on federal motorways 3 and 560 . The federal road 8 (Frankfurter Straße), which was stepped on January 1, 2007 to state road 333 , also runs through Buisdorf , which means that the overall situation is favorable to traffic.