Grimburg Castle is located in the Saar-Hunsrück Nature Park 1.8 km south-southwest of the municipality of Grimburg on the Kittelaufberg ( 460.1  m above sea  level ), a southern mountain spur of the Hasenknopf ( 497  m ). It is located at an altitude of 448  m . To the south of the spur, the Mühlenbach , which passes to the east, flows into the Wadrill , which flows past to the west . 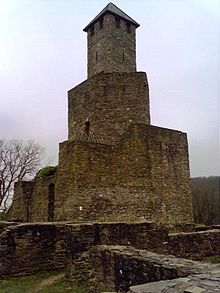 The Grimburg was built around 1150 by the noblemen of Saarbrücken . It was destroyed during the armed conflict over the occupation of the Trier bishop's chair - Trier schism from 1183 to 1190 - and rebuilt after the appointment of the imperial chancellor Johann I as Archbishop of Trier (1190-1212) -  de novo construxit . Since then the Grimburg has been one of the seven Trier regional castles named Arras , Ehrenbreitstein , Manderscheid , Neuerburg , Saarburg , Welschbillig and the Grimburg for the first time in the Liber annalium .

The Grimburg was the administrative seat and place of jurisdiction of the Electoral Trier office of Grimburg named after it and first mentioned in 1328 .

It remains to be investigated who or which family built the first Grimburg Castle - it will probably have been the original residential tower , which was later removed and a new built-in pentagonal tower - and whether the castle was the owner of the former cathedral coast the manorial rights in Grenderich-Sauscheid-Gusenburg and the St. Paulin monastery as the manorial in and around Wadrill goes back. Because both, the cathedral sexton and the St. Paulin monastery, have a quarter of a share in Grimburg Castle, as a verdict of April 4, 1258 stated. The castle crew must pay homage not only to the Archbishop of Trier, but also to the two co-owners, who can use them as needed. Ownership obliges and so the two co-owners of the castle complex also have to take on certain burdens.

The dignity of the cathedral coast has been held by Simon von Warsberg since 1242, making him the beneficiary or prebender of the Grenderich-Sauscheid-Gusenburg cathedral coast. In 1252, Simon von Warsberg was also elected provost of the cathedral and thus held the highest dignity within the cathedral chapter. The efforts of the cathedral custodian and cathedral provost Simon von Warsberg to expand and establish his rights - 1248 patronage and tithe rights and 1258 share rights in the Grimburg - are understandable against the background of his close relationship to the family of the noblemen of Saarbrücken, who have become Trier since the elevation of the Grimburg Landesburg shortly after 1190 held the office of burgrave for a hundred years. Boemund von Saarbrücken (called von Grimburg ), who later - around 1270 - built Dagstuhl Castle and Boemund von Grimburg called himself Herr zu Dagstuhl , is Simon von Warsberg's nephew. These and other family ties that are not to be examined in more detail here and the attempts to expand and establish power and influence should be kept in mind during further research.

Emperor Maximilian I , ruler of the Holy Roman Empire from 1508 to 1512 , visits the castle with his entourage in 1512 - allegedly for falconry. In 1522 Imperial Knight Franz von Sickingen occupied the castle without a fight. Elector Johann von Schönenberg , who lives in the castle, renewed and expanded the castle chapel in 1585. The castle suffered severe damage in the Thirty Years' War (1618–1648) and was set on fire by French soldiers in the Reunion Wars in 1683. Around 1690, the administration of the Grimburg Office was transferred to the fallen arch donor Lascheider Hof near Hermeskeil and the castle was given up. The mighty castle complex was left to decay and served the surrounding villages as a convenient quarry.

In 1978 the Friends of Burg Grimburg was founded, which, in cooperation and with the support of the Hermeskeil community and the local community of Grimburg, took care of the uncovering, excavation, protection and partial reconstruction of the castle ruins. Since then the castle complex has been restored: the castle house was rebuilt from 1978 to 1988, the keep from 1978 to 1990, the witch and kitchen tower from 1981 to 1987 and the entrance tower from 1999 to 2000.

Today the Grimburg presents itself as a tourist attraction and serves as a backdrop for cultural events such as castle festivals and castle plays. Since 2001, civil weddings of the Hermeskeil registry office have also been carried out in the Burghaus .

The castle complex is around 300 meters long and 90 meters wide. This made the Grimburg, if not the most important, at least the most spacious of the former Electorate of Trier castles. It consists of a bailey , a rectangular keep , Palas and a chapel . The lower church served the residents of the outer bailey for worship, while the upper church was reserved for the archbishop and his officials as a gallery with its own entrance .