Cantilan is located on Lanuza Bay , which is part of the Philippine Sea and is the second northernmost and most populous part of a settlement area called CarCanMadCarLan ( Carrascal , Cantilan, Madrid , Carmen , Lanuza ). Cantilan is thus also the second northernmost municipality in the province of Surigao del Sur . The interior is at the mouth of the Cantilan River . The neighboring municipalities are Carrascal in the northwest and Madrid in the southeast.

The city is an emerging commercial center of the region. There is also agriculture (mainly rice and coconut trees), cattle breeding (mainly pigs, chickens and water buffalo ) and coastal fishing. With regard to the processing industry, the "Lechon House" is relevant, which specializes in the production of suckling pigs, whereby usually not piglets, but rather annual pigs ( runners ) are processed. The usual Philippine retail trade in the form of so-called sari-sari stores is widespread.

Cantilan Harbor as seen from the river. Buildings on land: the market hall on the left, the fire brigade building in the middle

The township is crossed by the concrete coast road Surigao - Tandag . Cantilan has a harbor in the Cantilan River , which can only be reached by watercraft with a very shallow draft (" pump boats "). In addition, between Cantilan and Carrascal on the east side of the Capungan peninsula, "Consuelo Port" ( map ) is a berth for ships with a slightly larger draft. The nearest airport or airfield is in Tandag , the two larger ones in Surigao and Butuan . 9.38001 125.986683

There are both public and private schools that cover all levels from elementary school to university. Particularly worth mentioning 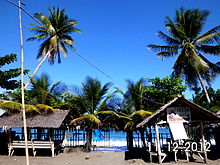 Party place on the beach

On the northern part of the coast ( Barangay San Pedro), various properties on the beach ("Bay-Bay") are used commercially by providing covered tables with benches for guests ("Waiting Sheds"), which are often also on the property there is a kiosk for drinks and snacks, a kind of "self-service restaurant" on the beach. Often there is also the option of karaoke , which is very popular with local guests. The quality of the sanitary facilities or changing rooms is customary for the location. There are also a few guest houses for overnight stays, of which the "Solar Lodge" is the most interesting because of its location (right on the shore).

Cantilan, like all of Mindanao, has a tropical climate. Average monthly rainfall is 257.2 mm (10.13 in). The rainy season is from November to March, the dry season from April to September. But even in the latter there are often evening showers and thunderstorms, which the locals call Sobasco . The area is occasionally hit by typhoons.

Note: The links to the typhoon situation are always kept up to date, so they may no longer refer to the events in the article.