Carmen is a municipality in the province of Surigao del Sur . It has 10,347 inhabitants (August 1, 2015 census). Located near the coast of the Philippine Sea (Bay of Lanuza), from which it is separated by Bunga ( Barangay of Lanuza ), Carmen is the second-southernmost part of a relatively closed region known as CarCanMadCarLan . The neighboring communities are Madrid in the NNW and Lanuza in the SE.

The township is crossed by the concrete coast road Surigao - Tandag . Since Carmen is not on the coast, it also has no port. The closest airport is in Tandag , the two larger ones in Surigao and Butuan . In Carmen there is the " Lanuza airfield" - which, strictly speaking, is a road of approx. 700 m length, which can be used as a runway by small aircraft in an emergency and branches off from the coast road Surigao - Tandag to SSW - approximately 2 km after the Carac-An bridge towards Lanuza.

The “lost river” (Hubason) is dammed by a concrete weir, which enables water to be continuously drawn off for the nearby rice fields. As a result, a water depth of up to 2.5 m is reached above the weir, even in the dry season, so that a “jungle pool” has emerged, which is known to tourists as “Malibu”. It is located in Barangay San Vicente at 9 ° 12'24 "N and 126 ° 0'45" East. Several “waiting sheds”, that is, covered table-bench combinations and a covered dance floor with music system, are available and can be rented. 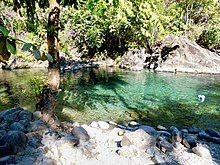 The community was founded by emigrants from the island of Bohol, from the city of the same name Carmen (Bohol) . The first settlers included Inocencio Suan, Isidro Cubero, Quirino Matildo and Dionisio Derigay, who entered the country around 1900. The settlement was originally a Sitio with the name Cabakhawan of Cantilan , which was upgraded to Barangay Carmen at the instigation of the newcomers. More immigrants from Cebu and Leyte arrived and allowed the place to grow. Carmen then became a barangay from Lanuza , which was itself a spin-off from Cantilan. Carmen was born on August 16, 1971 by RA No. 6367 became an independent city and the name of the whole area, which was originally Cantilan, became CARCANMADCARLAN.

Carmen, like all of Mindanao, has a tropical climate. Average monthly rainfall is 257.2 mm (10.13 in). The rainy season is from November to March, the dry season from April to September. But even in the latter there are often evening showers and thunderstorms, which the locals call Sobasco . The area is occasionally hit by typhoons.

Note: The links to the typhoon situation are always kept up to date, so they may no longer refer to the events in the article.