Lanuza is a rural community on the northeast coast of Mindanao in the Philippines . It has 12,001 inhabitants (August 1, 2015 census) and is the namesake of the Lanuza Bay , the southeastern border of which forms the municipality. The extensive municipal area with an area of ​​395.76 km² is located in the province of Surigao del Sur . Several languages ​​are spoken in Lanuza, most notably Cebuano , Chabacano , Manobo and Wáray-Wáray .

Lanuza is the southernmost area of ​​a relatively closed region called CarCanMadCarLan ( Carrascal , Cantilan , Madrid , Carmen , Lanuza). Neighboring communities are Carmen in the northwest, Cortez in the east and the provincial capital Tandag City in the south. The eastern part of the northern border forms the Bay of Lanuza , which is part of the Philippine Sea .

Agriculture, especially rice cultivation and coconut palms as well as pigs, chickens and fishing are essential livelihoods of the largely conservative Catholic population. Lack of capital and inadequate infrastructure, as well as low purchasing power, make it difficult to set up businesses. 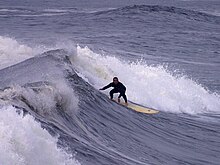 Lanuza has hardly been developed for tourism, but is taking sustainable measures for its development. Lanuza Bay offers good wind conditions for surfers, especially in the months between November and March. An international surfing competition takes place every November. Special emphasis is placed on the cleanliness of the community and an intact nature, which is expressed by the slogan "Green and Clean Lanuza". Not least because of its remote location, the Lanuza is a safe place with low crime.

In Lanuza the so-called Agsam jewelry is made. These are creepers woven into ornaments , which are artfully crafted into jewelry. The defoliated plants are treated in clay for a few days beforehand in order to maintain their stability and their typical brownish color. Noteworthy sights include the 15-meter-high Magkawas waterfall in the middle of a graceful flora and the cave labyrinth of Campamento.

Lanuza is shown as Lanuyo on a map of the cantilan from 1802, which covered the entire area of ​​Carcanmadcarlan. It was considered a landing point for seafarers and traders. At that time, some smaller settlements in the area of ​​today's Lanuza were already noted, which still exist today as Sitios , including Capadian.

The township is crossed by the concrete coast road Surigao - Tandag . The closest airport is in Tandag , the two larger ones in Surigao and Butuan .

The tropical rainforest is decisive for Kima . The average monthly rainfall is 257.2 mm. The rainy season is from November to March, the dry season from April to September. But even in the latter there are often evening showers and thunderstorms, which the locals call Sobasco . The area is occasionally hit by typhoons. Earthquakes of considerable strength and duration are possible.

Note: The links to the typhoon situation are always kept up to date, so they may no longer relate to the events in the article.