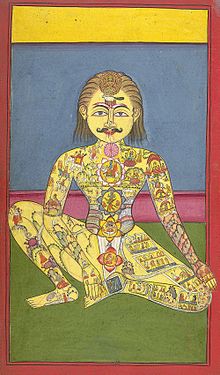 Representation with seven main chakras from a yoga manuscript from 1899. In the lower, the four-leaf muladharachakra , Ganesha is given as deity, in Svadhisthana Brahma , in Manipura Vishnu and in the heart chakra Shiva with his wife Parvati 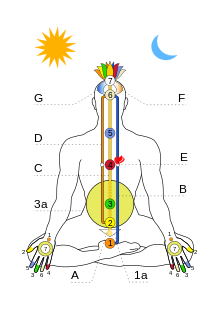 With chakra ( Sanskrit , m., चक्र, cakra , [ ʧʌkɽʌ ], literally: 'wheel', 'discus', 'circle'), plural chakras , are used in tantric Hinduism , in tantric-Buddhist Vajrayana , in yoga as well as in some esoteric teachings denote the assumed subtle energy centers between the physical body and the subtle body (cf. astral body ) of man. These are connected by energy channels.

Seven of the chakras, the assumed main energy centers of the human being, are localized along the spine or in the vertical central axis of the body. They are connected through the assumed middle energy channel, the Sushumna- Nadi, through which the Kundalini- force also rises. This Kundalini, the underlying potential power of every person, rest before this process “curled up like a serpent” in the lowest center, the Muladhara chakra. Different teachings and schools vary in their views on details such as the number and exact location of the chakras, mostly today, especially in yoga, one starts from a system with seven main chakras.

The seven main chakras are assigned a number of petals of a " lotus flower " as well as, in modern schools, certain colors that vary in the teachings. A deity is associated with each center, and these are also indicated differently. The lotus flower is used in India as a symbol of purity, loyalty, creativity and enlightenment; it also stands for the fact that, like the chakra, it opens and becomes beautiful.

The main chakras are (in accordance with the anatomical position from top to bottom):

With regard to the functions assumed in chakra teaching, the naming is usually from bottom to top.

Each of the lower five centers has a supporting element such as earth, water, fire, wind and ether (see also Mahābhūta and Guna ).

The state of the chakras should have an effect on the associated organs as well as on emotions, psyche and character. Disturbances and blockages can therefore show up on the physical as well as on the psychological level. Different yoga systems offer possibilities to harmonize chakras and dissolve blockages. The postulated goal of yoga is the healing of body, soul and spirit in order to find back to a wholeness and to advance in the spiritual development. If all seven main chakras including the crown chakra are fully open and the life energy ( Prana ) can flow without blockages and disturbances, then the individual has attained enlightenment according to Hindu and Buddhist teachings.

Chakras in the scriptures

The Hindu chakra system appears in various scriptures, especially in some Upanishads and other scriptures of the Veda . Other important mentions can also be found in the scriptures of Tantrism - such as the Sat-Chakra-Nirupana, Padaka-Pancaka and Gorakshashatakam.

The doctrine of chakras was made accessible to the West through the publications of the British Sir John Woodroffe (alias Arthur Avalon) and found its way into theosophy and other esoteric-spiritual directions. Today the doctrine of chakras occupies a not unimportant place in certain yoga directions for awakening the Kundalini energy, in neotantra and also in alternative healing methods such as Reiki .

This teaching was only marginally treated by research, for example by the psychologist Carl Gustav Jung . Attempts by esoteric-spiritual circles to equate the chakras with the nervous system , as suggested by Charles Webster Leadbeater , among others , are not scientifically recognized .