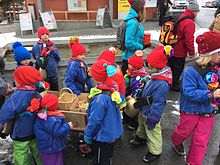 The Chalandamarz ( vallader and putér [tɕɐˌlandɐˈmarts] , putér Chalandamarz ? / I ), in Central Grisons Calondamars (a), -marza u. Ä., in the Graubünden southern valleys Calendamarz, Calentmarz u. Ä., is a spring custom in parts of the Romansh-speaking and Italian-speaking areas of the Swiss canton of Graubünden . It is celebrated on or around March 1st, the beginning of the year in Rome .

In the past, the community presidents , clerks and treasurers elected in February were installed in their offices on this day .

Chalanda goes back to the Latin kalendae “first day of the month”; see. Calendar . In Graubünden Romansh the word only occurs in the traditional name chalandamarz , in the Alpine Lombard dialects of southern Switzerland as calend, but also as appellative in the actual meaning. March is Romansh and Lombard for March .

Chalandamarz is committed in the Engadin and Münstertal , in Oberhalbstein and in the Albula valley as well as in the Puschlav , Bergell and Misox . The Sut and Surselva do not know the custom or, as in the case of the Hinterrhein Valley, no longer know it; The Muntinadas are celebrated in Trin , where the motif of wearing a bell shows similarities with the Chalandamarz festival.

Today, schoolchildren attracts Chalandamarz cattle bells ( cowbells , bells, cow bells and small goat bell) ringing, whips popping and singing through the village, to drive away the winter as well as food and money heischen . The exact implementation of the festivities is subject to noticeable differences from village to village. In the Lower Engadine Ftan , wearing masks is also part of the custom, in which a fusion of the customs of the spring festival with those of the carnival becomes visible. In Poschiavo and Misox , formerly also in Scuol and Tschlin as well as in Innerferrera , they also burn a straw man as a symbol of winter. The day is usually concluded with a meal and a ball for the young people.

The artist Alois Carigiet made a prominent representation of the custom in the picture book Schellen-Ursli . 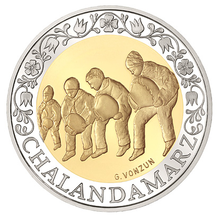 In 2003, Swissmint , the mint of the Swiss Confederation, released a commemorative coin designed by Gian Vonzun on this subject.