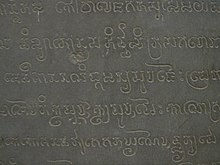 Closeup of the inscription on the Po Nagar stele, 965 CE. The stele describes feats by the Champa kings.

The Cham script is an Abugida used to write the Cham language , an Austronesian language spoken by some 230,000 people of the Cham people in Vietnam and Cambodia . It is written horizontally from left to right.

The Cham script is a derivative of the Brahmi script of India, which in turn derives from the Aramaic script . Cham was one of the first scripts to develop from the South Indian Brahmi script Vatteluttu sometime around the year 200 AD. It came to South India as part of the spread of Hinduism and Buddhism . Hindu stone temples of the Champa civilization contain both Sanskrit and Chamic stone inscriptions. The earliest inscriptions in Vietnam were found in the Mỹ-Sơn temple complex. Dated around AD 400, the oldest is written in incorrect Sanskrit. Later inscriptions alternate between Sanskrit and the Cham language of those times.

Cham kings studied classical Indian texts e.g. B. the Dharmaśāstra and inscriptions refer to Sanskrit literature . Eventually, while the Cham languages ​​and Sanskrit influenced each other, the Cham culture adopted Hinduism and the Cham people were finally able to adequately express the Hindu religion in their own language. By the 8th century AD, the Cham script had outgrown Sanskrit and the Cham language was in full use. Most of the surviving manuscripts focus on religious rituals, epic battles and poems, and myths.

The Cham people currently live in two groups: the Western Cham in Cambodia and the Eastern Cham ( Phan Rang Cham ) in Vietnam. In the first millennium AD, the Cham languages ​​were a chain of dialects along the Vietnamese coast. The breaking of this chain into distinct languages ​​came after the Vietnamese pushed south and led the Cham people to retreat into the highlands, with some such as B. the Phan Rang Cham became part of the Vietnamese-ruled society in the lowlands. The division of the Cham people into two ethnic groups took place immediately after the capital was overthrown by the Vietnamese. Both use distinct varieties of the Cham script, with the western Cham being predominantly Muslim and nowadays preferring to write their language in Arabic script . The eastern group consists mainly of Hindus who continue to use the Cham script. During the French colonial era, both groups had to use the Latin alphabet .

The script is highly valued in the Cham culture, but that does not mean that many people learn it. Efforts have been made to simplify spelling and encourage learning to write, but these have had limited success. Boys traditionally learned the script around the age of 12, when they were old and strong enough to tend the water buffalo. However, women and girls typically did not learn to read.

As Abugida, Cham only writes the individual consonants, supplemented by mandatory diacritical marks for vowels that are added to the consonants.

The eastern Cham script. Nasal consonants are listed both unmarked and with the diacritical mark kai . The vowel diacritics are next to a circle indicating their position relative to some consonant.

Most consonant letters, e.g. B. [b] , [t] , or [p] contain the inherent vowel [a] , which does not need to be written. The nasal consonants [m] , [n] , [ɲ] and [ŋ] (the last two are transcribed in Latin with nh and ng ) are exceptions and have the inherent vowel [ɨ] (transcribed with eu ). A diacritical mark called kai that does not appear with the other consonants is written under a nasal conson to write the [a] vowel.

Cham words contain only vowel syllables or consonant-vowel (consonant) syllables (V and CV (C)). There are several characters for final consonants in the Cham script; other consonants are simply given a longer tail on the right to indicate the lack of an ending vowel.

The Unicode block for the Cham font Cham is U + AA00 .. U + AA5F. Gray shading indicates unassigned code points .