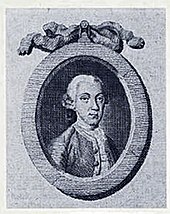 The son of the mountain commissioner Johann Christian Schmid and his wife Christiane Friderike († March 18, 1759 in Eisleben), the only daughter of the mayor of Eisleben Christian Ferdinand Wappendeusch, lost his mother at the age of thirteen. Therefore, his maternal grandmother, court councilor Sophie Friedericke Wiesner (née Stiegleder), took over the upbringing of the children. A fourteen-year-old brother died in 1765. His brothers also included the Thuringian mountain bailiff Ernst Rudolph Wilhelm Schmid (* 1753; † June 5, 1795 in Stolberg) and Karl Ferdinand Schmid , professor of ethics and associate professor of natural and international law in Wittenberg.

Educated by his father, he subsequently had several private tutors and attended high school in Eisleben. On the advice of his maternal step-grandfather, Hofrat Johann Heinrich Wiesener, he began studying law at the University of Leipzig in 1762 . However, due to his youth, he first dealt with the philosophical sciences. His teachers were Johann Heinrich Winckler in physics, Johann Gottlob Böhme in history, Gottfried Heinsius and Georg Heinrich Borz in mathematics. Daniel Gottlob Rudolph (1726–1768) explained the ancient writers to him, Johann August Ernesti the ancient sciences and Christian Fürchtegott Gellert the beautiful sciences. Under that guidance, he obtained the degree of Master of Philosophy in 1766 . During this time he made friends with the poet Johann Benjamin Michaelis .

In addition, he also attended the legal lectures with Ferdinand August Hommel , Johann Gottfried Sammet (1719–1796), Christian Heinrich Breuning , Georg Stephan Wiesand , Johann Ludwig Conradi , Friedrich Gottlieb Zoller and Christian Heinrich Wilke (1722–1776) in order to comply with the request to become a good lawyer of his father. A short stay led him to Jena, where he met Friedrich Just Riedel (1742–1785) and Heinrich Christian Boie, among others . In 1768 he became a candidate at the law faculty of the University of Erfurt , where he received his doctorate in law in 1769, and in the same year he became an associate professor of law, but without a salary.

Since he was offered a full professorship in rhetoric and poetry at the University of Giessen in 1774 , which was also financially endowed, he moved there in the same year. On December 17, 1784 he was appointed to the Hessian-Darmstadt government councilor. He took over on January 6, 1787 the function of deputy librarian of the university library and 1790 the function of the leading librarian of the same.

In 1774 he married Sophie Christiane Susanne, the eldest daughter of the pastor in Miechelrieth Johann Christoph Schulz, a sister of the Giessen superintendent Schulz. The daughter Theodore Henriette Johanne Sophie emerged from this marriage on March 12, 1784.

Schmid had left a large number of specialist articles in the specialist literary journals of his time. Otherwise he appeared as a comedy author, lexicographer and poet connoisseur.