The Gentiana Clusii ( Gentiana clusii ) also stems Clear lime-gentian , Real Alps gentian or lime bell gentian called, is a species of the genus gentians ( Gentiana ) within the family Gentianaceae (Gentianaceae). This species, which is very noticeable during the flowering period, has a single bell flower on an extremely short stem. 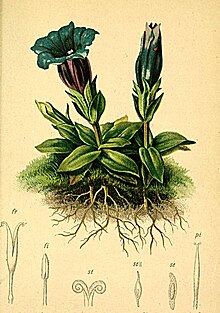 Illustration from Atlas of Alpine Flora

The Clusius gentian is a wintering green, perennial herbaceous plant and reaches heights of growth of 5 to 15 centimeters. There is a stem, but it is very short. The leaves are arranged in a basal rosette. The simple leaf blade is lanceolate with a length of up to 5 centimeters wide with a pointed upper end and it is usually broadest at and below the middle. The leaf blades feel a bit leathery and coarse. Stem leaves are not always present, if they are then up to three pairs, and they are smaller than the basal leaves.

The flowering period lasts from May to August. The flowers are solitary and upright.

The hermaphroditic flowers are radial symmetry and five-fold with a double flower envelope . The five sepals are fused into a long calyx tube. The five slightly protruding, at their lower end slightly constricted and sharply pointed calyx lobes are usually longer than half the calyx tube and the calyx bays are pointed. The intense blue corolla with whitish stripes on the inside or distinctly dark blue dotted corollas is up to 5 centimeters high. The five petals are fused bell-shaped.

The Clusius gentian is a hibernating green hemicryptophyte .

When the temperature drops, the flower closes. Often, as in wet conditions, the stem with the flower lays down on the ground.

The Clusius gentian is widespread in the Alps , in the Alpine foothills , in the Jura , in the Black Forest and in the Carpathian Mountains . It grows on poor and calcareous dry grass or on gravel. It thrives from the montane valley location up to an alpine level up to altitudes of 2800 meters.

The Clusius Enzian is, like all other types of gentian, in Germany and Austria under conservation .

The specific epithet clusii and terms such as "Clusius-Enzian" honor the doctor and naturalist Charles de l'Écluse (Latinized Clusius, 1526–1609). The Clusius gentian is often confused with another type of gentian, the Koch's gentian ( Gentiana acaulis ), whose botanical name translates as stemless gentian . The term "stemless Kalkenzian" refers to the extremely short stem of both species, the word "Kalk" to the occurrence on calcareous subsoil.

The first description of Gentiana clusii was in 1854 by Eugène Pierre Perrier de la Bâthie and André Songeon .

One can distinguish the following subspecies:

Use and cultural significance

Like the Kochian gentian, the Clusius gentian is available from horticultural propagation in specialized nurseries.

With this characteristic, bright blue flower, which is extremely large in relation to the rest of the plant, this gentian species became the archetype of the Alpine flower and the gentian par excellence. Most of the illustrations in which gentian is shown without a detailed description show its flowers - including on the labels of liquor and medicine bottles, although there are never components of stemless gentian, but almost always bitter substances from the underground parts of plants of large species such as yellow Gentians ( Gentiana lutea ) are included.