Dénes Kőnig (born September 21, 1884 in Budapest , Austria-Hungary , † October 19, 1944 there ) was a Hungarian mathematician . He was the son of the mathematician Julius König . He mainly worked on graph theory and, together with Leonhard Euler , Arthur Cayley and Gustav Robert Kirchhoff, is considered the founder of this branch of mathematics . 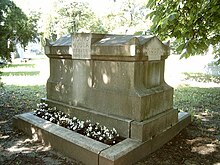 Kőnig was a highly talented mathematician and published his first work on his own research results at the age of 15. In 1902 he began to study mathematics in Budapest, which he continued in Göttingen in 1907. In the same year he received his doctorate and worked from then until his death at the Technical University in Budapest . There he became a private lecturer in 1911 , associate professor in 1932 and full professor in 1935 .

After the National Socialist occupation of Hungary , Kőnig helped persecuted mathematicians. A few days after the Hungarian National Socialists came to power , he committed suicide as his imprisonment was imminent due to his Jewish roots.

The lectures on the four-color problem given by Hermann Minkowski in Göttingen aroused Kőnig's lifelong interest in graph theory. Since 1911 he has given lectures on this in Budapest. His monograph Theory of Finite and Infinite Graphs , presented in 1936, provided the first strictly scientific and comprehensive presentation of this mathematical sub-area and played a major part in its dissemination. His important work on the factorization of bipartite graphs is related to the marriage theorem of Philip Hall closely related.

Kőnig was the author or co-author of more than 33 scientific papers and author of 5 books.

Together with his brother György (Georg) Kőnig , Dénes Kőnig donated the Gyula Kőnig Prize in memory of their father , the aim of which is to promote research among young mathematicians. Receiving the award is considered a high level of scientific recognition.

In 2007 the Society for Industrial and Applied Mathematics (SIAM) introduced the Dénes Kőnig Prize. The prize is awarded every two years and comes with a cash prize of US $ 1,000 .