The place and year of birth of the first son of Christopher Columbus are determined differently by different authors. Some historians believe that he was born in Porto Santo , a neighboring island to Madeira , while others assume that Lisbon was the origin. According to Urs Bitterli, the year of his birth is 1480. His father brought him to Spain in 1485 to the La Rábida monastery . Some historians also assume that he stayed with his sister-in-law Violante Moniz and her husband Muliart in Huelva . He stayed there until his father's triumphant return from the New World in 1493, after which he, together with his brother Fernando , was appointed page to Prince Don Johann .

After the prince's death, he became the page of Queen Isabella I and remained at the Spanish court for a long time. His father's will of 1498 declared Diego and all those who followed him to be the sole heir to his father's duties, honors and privileges. When he set out on his last trip, he left Diego as the representative of his interests in order to reverse the suspension of his privileges. This already happened with regard to Diego's wedding, which the father had postponed until after his return. In 1503 the Queen made Diego the contino of her house with a salary of 30,000 maravedis per year, which prolonged his career at court.

After Christopher Columbus' return from the New World, a correspondence arose between father and son (1504–1505), which marked Diego as an advocate of his father's interests at the court of the Catholic Kings . This correspondence is an important historical source today. Diego urged the father to regain his privileges and bequeath them to him. In one of these letters there is a great eulogy to Amerigo Vespucci . Diego stayed at his father's side until his death in 1506. Not before 1508 he married María de Toledo , the daughter of Fernando Álvarez de Toledo, the chief commander of León's troops and brother of Fadrique Álvarez de Toledo, 2nd Duke of Alba . Marriage to a noble Spanish family was in the interests of the Columbus family in order to regain the suspended privileges.

Pressure from the Duke of Alba enabled Diego to inherit his father's privileges, against the opposition of King Ferdinand . By the grace of King Ferdinand, not by recognition of his inherited rights, Diego was Admiral and Viceroy of the New World since 1508. Diego replaced the governor Nicolás de Ovando in Santo Domingo , where he arrived in 1509, accompanied by his wife, uncles Bartolomé and Diego , as well as his brother Fernando . 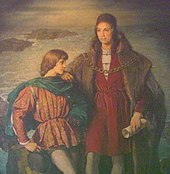 As a result of the trials brought by the Columbus family to demand the fulfillment of the contracts drawn up in Santa Fe (the so-called Capitulaciones de Santa Fe ) , the royal council in Seville decided on May 5, 1511 to recognize most of the rights . The Admiral was awarded the viceroyalty, the hereditary rule over La Española and all islands discovered by Christopher Columbus, the judicial power over these islands, one fifth of the gold found on them and one tenth of the economic income there. The king recognized these rights on June 17, 1511, which were restricted to those of Christopher Columbus in that these rights only extended to the islands that had been discovered by Christopher Columbus himself. Diego did not satisfy this verdict and initiated a new trial, as a result of which King Ferdinand angrily sent him several reminders. 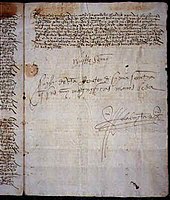 Meanwhile, Diego ruled La Española, and on his behalf Cuba was conquered by Diego Velázquez de Cuéllar , Puerto Rico by Juan Ponce de León , and Jamaica by Esquivel . In order to limit Diego's power, a court day was created on La Española in 1511, consisting of three appellate judges under the direction of Diego, who was in constant conflict with the members of this court day. In addition, the mainland territories were removed from his jurisdiction. The controversy that arose over the question of the treatment of the indigenous people led to a split into two camps; the supporters of the king, led by Miguel de Pasamonte , who demanded strict observance of the laws passed in Burgos in 1512 (the so-called Leyes de Burgos ) and the Colombian camp under the leadership of Diego, who demanded a more flexible approach to the protection of the local population . The allegations of the royalists against the governor resulted in his replacement by three Hieronymite monks , chosen by Cardinal Francisco Jiménez de Cisneros , and his forced return to Spain in 1515. Back in Spain, Diego tried to challenge the state decisions again. The judgment of the council of A Coruña of 1520 reinstated him as viceroy, but finally confirmed the restriction of the viceroyalty to the islands discovered by Christopher Columbus, the subordination of the viceroys to local courts and investigations, and the severe limitation of the viceroy's powers.

Upon his return to La Española, he faced a revolt of black slaves. His conflicts with the court day and the royal officials led to a new trial, as a result of which King Carlos I removed him from all his offices and forced him to return to Spain. In Spain he continued his legal disputes and accompanied the court on his many trips.

Diego died in 1526 on his way to Seville for the king's wedding to Isabella of Portugal . His widow, who died in 1549, continued the trials for the privileges granted to Columbus in the 1492 Treaties of Santa Fe. As a result of these trials, these privileges were completely withdrawn from the Columbus family in 1536.

The direct descendants in the legitimate male line already died out with his grandson, Diego Colón de Pravia, who died on January 27, 1578. Descendants in the female line still live today, the head of the family is currently Cristóbal Colón de Carvajal y Gorosábel, 18th Duke of Veragua (* 1949).