This article deals mainly with the term service man in modern times. For the medieval interpretation, see Dienstadel and Ministeriale . 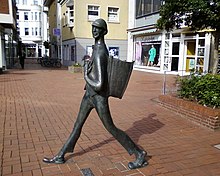 Monument to the servant Karl Kaufmann ("Schicke-Schacke"; 1838–1907), city ​​original of the city of Peine in Lower Saxony

As a service man ( Mz. Porters or servants ) was up in the first half of the 20th century, a service called, the time in public places or in the household fixed-term contracts of all kinds against remuneration took over. His main tasks were in the transport of general cargo , for example suitcases , and in messenger activities . In the original historical meaning, male servants are also referred to as male persons who were obliged to provide monetary or labor services to their lords or landlords, as well as ministerials of various ranks.

The term Dienstmann first appeared in the Middle Ages as a Germanization for ministerials , for men who were in the service of a court and who were ultimately able to rise to the rank of knight , should they not yet belong to it. 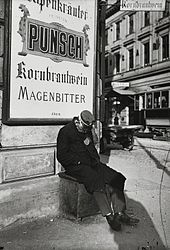 In the Austrian Empire , the liberal trade regulations , which came into force in 1859 by means of an imperial patent, included the trades of those who keep means of transport available for everyone in public places or who offer their services, such as servants, wage shops and the like. s. f. , to form a licensed trade ( space trade ). These men, known as servants (before 1859: corner workers), could also be used as temporary workers for many domestic activities:

Jakob Folkmann, the "founder of the servants' system in Austria" (photo undated)

The two Dienstmann Institutes , the Commissioner and the Express , founded in Vienna on May 15, 1862 , were merged on July 1 of the year by the doctor Jakob Folkmann (1819–1902) under the name Wiener Stadtträger and at the address Vienna-Innere Stadt , Seilergasse 4. The task of this 1st Viennese Service Man's Commission Institute was to provide messengers, porters and guides for all kinds of duties . Among other things, Folkmann expanded messenger services into the postal service by equipping the service men with a light package of writing props that enabled a client on the street to write a few lines, seal them and have the service man deliver what was written.

The institute took over a guarantee of 50 guilders for each servant . Guarantee stamps, which had to be handed over to clients without being asked, ensured compensation claims against the Dienstmann-Institut within 48 hours. The municipal authorities have set up 300 service men in the inner city of Vienna, in the districts within the line wall and in the suburbs.

In May 1862 Folkmann had stipulated the following uniforms for the service men belonging to his institute commissioner :

Folkmann used music, which is particularly popular in Vienna, to promote his institute: at the end of July 1862 he had the orchestra of the well-known military bandmaster and composer Johann "Hans" Weinlich (1833–1897) perform as the institute's chapel and composed that of the institute's bandmaster Weinlich Perform service men polka .

The service men prevailed surprisingly quickly as the symbolic figure of the little man. This activity even meant a social advancement, especially for the needy who poured into the royal seat of Vienna from all parts of the monarchy.

Formally joined on 1 April 1883 during Dienstmann the name space servants in the foreground.

In 1899 the association for the support of needy service men was founded, in 1901 the professional association of concession (ionized) W (iene) r service men (city carriers) .

In September 1911, the trade of those who offer personal services (as messengers, porters, escorts and the like) in non-public places was tied to a license.

After the “Anschluss” of Austria, the Jews who were active in the field trade were withdrawn from trade licenses by the Nazis . Then they were deported to the concentration camps. The non-Jewish "service men" had the National Socialists, who were suspicious of the "street people" (Henry Mayhew) of any kind, enlist for labor or the Wehrmacht after the "Aryanization".

Of the 180 or so Viennese "service men", a maximum of 17 remained after the Second World War, who initially found their best clientele among surreptitious traffickers . With the normalization of economic conditions, however, this customer base disappeared. The last servant still active in the mid-1950s was Anton Wuich († 1977; age: 60), nephew of the important ballistic specialist Field Marshal Lieutenant Nikolaus Freiherrn von Wuich (1846-1910). He worked as a caretaker for the neurologist Wagner-Jauregg , the internist and TBC specialist Wilhelm Neumann (1877–1944) and as a confidante of Irmgard Seefried , Elisabeth Höngen , Johannes Heesters and Theo Lingen from the field of performing arts.

As of September 4th, 2017, ÖBB will start a test operation at Vienna Central Station with the offer of - staffed - porters who carry up to 2 pieces of luggage each 25 kg between taxi and train for € 7 for up to 15 minutes. The "ÖBB luggage transport to the train" service - as it is written on the employees' red-orange safety vests - can be booked by phone or online the day before by 10 p.m. or, if there is free capacity, can be used spontaneously.