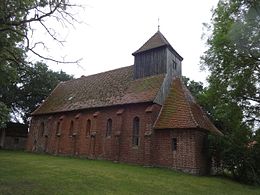 The Evangelical Village Church Schönfeld is a sacred building in Schönfeld , a municipality in the Mecklenburg Lake District in Mecklenburg-Western Pomerania . It belongs to the parish of Schönfeld of the Demmin provost in the Pomeranian Evangelical Church District .

The exact construction date of the church is not known. The Dehio manual assumes that the choir was built around 1400 , followed by the nave . Hugo Lemcke describes in his notes that in 1255 there was a church in Schönfeld as a branch chapel of the church in Verchen and that in 1491 it was upgraded to a parish church. According to the charge of Schonfeld Rectory Verchen originates west tower from the 16th century. Around 1900 the south and west sides of the nave, the roof tower and the vault in the choir were renewed.

South side of the choir

The choir, closed on three sides, was made of light red brick with mixed stones and - especially in the base - boulders . These are only slightly carved or layered. On the southern wall of the choir, you can see a priest's gate covered with field stones and wall fragments . The choir was stabilized with five double-stepped buttresses . On each of the three sides there is an ogival window, of which the eastern one is larger and deeper. They are decorated with triple-tiered walls made of masonry bricks.

The church nave made of dark red brick joins the choir to the west and takes up its width. Until more than half of the 19th century, this ship was still a stone building , as can be seen from Ernst von Haselberg's records . Thus, apart from the choir, the church in its present form belongs to the neo-Gothic style . On the north side, five more buttresses provide the necessary stability. The five windows on each side are slender, pointed arches, the one to the west in the tower yoke is larger and lower. The southern wall of the nave is structured differently. There are only three buttresses and three windows, with the window in the tower yoke being larger and lower. The boarded tower is square in its floor plan and has a sound arcade on each of the three visible sides . Behind it hangs a bell from 1654. The tower closes with a pyramid roof with a tower ball and weather vane . The gable of the nave is also clad with wood. This is followed by a smaller, drawn-in porch made of masonry stones. On its south side there is a simple gate through which the church can be entered.

The pulpit was built in the late Renaissance style between 1670 and 1690 and is structured with pillars and panels . The altarpiece shows Jesus Christ in its center , a bishop to the left and a figure of a saint to the right. Above the altar is a wooden crucifix . There are also remains of the church stalls from the end of the 18th century. It bears the inscription: ANNO 1670 DEN I IVNY BARTELMEVS SODEMAN HAT DISEN STOEL OF THE CHURCH ZV SCHÖNFELD VÖRERD.

The Grüneberg organ was built by Felix Johannes Grüneberg in 1914.