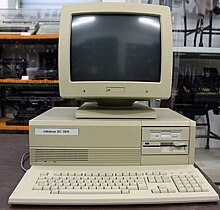 The personal computer EC 1835 was developed from 1988 in the GDR by VEB Robotron-Elektronik Dresden, department of devices E2 Karl-Marx-Stadt (now Chemnitz ), the VEB Robotron booking machine works Karl-Marx-Stadt and VEB Robotron office machine works "Ernst Thälmann" Sömmerda developed. The IBM-PC / AT ( IBM model 5170) with its Intel microprocessor i80286 , which served as a model for the EC 1835, was released in 1984 and was a further development of the IBM-PC / XT . The EC 1835 was a further development of the EC 1834 and was to replace it in series production at the end of 1990. Around 20 functional models of the EC 1835 were built in 1990, one of which was presented at the 1990 Leipzig Spring Fair . The sample device no. 11 is now in working order in the depot of the Chemnitz Industrial Museum (see picture).

The circuit basis of the EC 1835 was to be a system analogous to the i80286 with highly integrated edge and memory electronics from DDR development and production called the U80600 microprocessor system . However, it was no longer used in the EC 1835 instead of the original Intel circuitry. In the EC 1835, in contrast to the original IBM / AT, parts of the MSI logic were replaced by three types (one basic type) LSI-CMOS gate arrays U5301. These were designed by Robotron in Karl-Marx-Stadt and produced in the VEB Center for Microelectronics Dresden .

The system unit (basic device) of the EC 1835 consists of:

The EC 1835 should be offered with

By 1993/94 at the latest, additions to existing models and the creation of new models with a 32-bit microprocessor analogous to Intel 80386 were necessary. Using the cooperation with the USSR and with the participation of the user combines in the GDR - including Kombinat Robotron - in the SK development, a GDR production of a corresponding microprocessor system MP 800 should take place at the earliest possible point in time in technology level 5 ( structure width 1 µm). To provide a 32-bit microprocessor system MP800 (U80800) that is compatible with the i80386 and that has an extensive range of circuits, especially from the user combinations "Fritz Heckert" (FHK) Karl-Marx-Stadt , Automation Systems Engineering (AAB) Berlin and Elektro-Apparate-Werke ( EAW) Berlin as well as Robotron, the Kombinat Mikroelektronik (KME) strived to import crucial components of this system from the USSR on the basis of the votes started with the association “Mikroprocessoren Kiev” and to have the GDR participate with financially viable performance contributions.

In 1989, KME estimated that the in-house development and production of the main circuits of the U80800 system was not feasible in the period 1991-1995, because such important requirements as the personnel, hardware and software security of a modular development system required for this and the implementation of a research clean room for technology development in the Erfurt Research Center of the KME could not be guaranteed.

Was the main reason that according to SED -Beschluss "micron" a replica of the microprocessor type Micro-VAX 78032 of Digital Equipment Corporation (DEC) took precedence. The first 32-bit microprocessor developed by the GDR was therefore the MME U80701 presented in 1989 , the CPU of the replica of the MicroVAX II, the Robotron K 1820 . The development of the U80800 system at KME was nevertheless planned and was the basis for the production assurance EC 1835 from 1990 onwards. Work on the replica of the Intel 80386 began in Erfurt in 1986, but its priority was downgraded due to central instructions and a lack of capacity.

The ESER-PC successor models planned until 1995 were:

EC 1835 after the monetary union

After the monetary, economic and social union on July 1, 1990, the development work on the EC 1835 in the version described above was canceled. In Büromaschinenwerk Sömmerda AG (BWS AG), AT personal computers were now assembled using imported assemblies (motherboards and plug-in cards with original components as well as floppies, hard disks, etc.) and the existing housings, with the designations EC 1835/286, EC 1835 / 386SX and EC 1835/386 were mainly delivered to Eastern Europe and the Soviet Union including an MS-DOS 4.01 license. With the production of 8,055 pieces of these EC 1835, existing supply contracts for the PC 1715 and EC 1834 could be fulfilled and the existence of BWS AG was secured until mid-1991 within the framework of transfer ruble transactions. From the fourth quarter of 1990 these PCs were sold under the brand name soemtron . As in Sömmerda, from mid-1990 the successor to the BWK, Ascota AG Chemnitz , also sold PCs with adapted housing assemblies from the EC 1834/35 under the name ASCOTA .