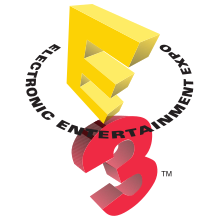 The old logo until October 2017

The Electronic Entertainment Expo , E3 for short (or E³ in the old spelling ), is one of the world's most important and popular trade fairs for video and computer games . In her present game developers and publishers at press conferences current and upcoming products. These usually take place before the actual visitor fair and are reserved for trade visitors and accredited press.

E3 has been held in Los Angeles since 1995 (with the exception of 2020), with a few exceptions, and is organized by the Entertainment Software Association .

The Game Critics Awards have also been presented at E3 since 1998 . Comparable international trade fairs are the Tokyo Game Show and Gamescom in Cologne.

Since the first trade fair in 1995, Nintendo , Sony and Sega have been among the largest video game developers and publishers who present their games at E3. Microsoft has also been presenting its own games at E3 since 2000 . Sega was no longer significantly represented from 2002 to 2018.

At the end of July 2006 it became known that some large companies in the industry would no longer support E3, which ultimately meant the end of the fair in this form. The publishers and developers criticized the steadily rising costs, which is why the organizers announced a radical change in the concept, which also included a downsizing and relocation of the event.

On August 1, 2006, the head of the organizer Entertainment Software Association (ESA) confirmed that E3 would not be continued in its previous form. The new concept included, among other things, a new date instead of May now in July, which would be close to the Christmas business. In addition, the E3 should no longer take place in the Los Angeles Convention Center, but in the conference rooms of one or more hotels in Los Angeles. As an exclusive trade fair, only 3,000 to 4,000 visitors are expected instead of 60,000.

Ultimately, E3 2007 with a different concept took place in a significantly smaller setting than in previous years in a hangar at the Santa Monica Municipal Airport in Santa Monica . This trade fair for trade visitors and accredited press, called E3 Media & Business Summit 2007 , took place from July 11 to 13, 2007 and, due to the restrictions, had significantly fewer visitors than the previous trade fairs.

As a follow-up event for consumers at the time, Entertainment for All or E for All took place for the first time in the Los Angeles Convention Center from October 18-20, 2007 . This event was already closed after the second event in 2008, as it was reintegrated into E3 the following year.

The 2008 E3 was scheduled for July 15, 2008 and ended two days later, on July 17. It took place again in the Los Angeles Convention Center, but still had significantly fewer visitors than the previous events in Los Angeles.

After the end of E3 in 2008, there was criticism from video game manufacturers, including Sega , Ubisoft and EA . They "hated the terrible E3, which now looks like a craftsman's show in the basement." It would have been noticed before, but now "it seems to have lost importance." In addition, the time in July is inappropriate for being Offer for the Christmas business even earlier, around May. There was also criticism from consumers . The manufacturers no longer really used E3 to announce new games , show trailers or publish other material. For example, the manufacturer Nintendo only showed three of its own games at its press conference , which are developed by a single one of its studios, although Nintendo has a large number of in-house studios. The target group of these games was also criticized.

Based on these reactions, the decision was made to return to the old concept before 2007 with E3 2009 and to open the fair to the general public, i.e. to waive the obligation to invite. With this step, the organizer would like to re-establish E3 as the most important visitor fair in the computer and video game sector.

The E3 2009 took place from June 1st to 4th in Los Angeles. It was still largely reserved for trade visitors and the press, but the number of visitors could still be increased to 41,000. Since then, the fair has been taking place under the old name "Electronic Entertainment Expo" every year in June in the Los Angeles Convention Center.

At E3 2010, Electronic Arts , Konami and Ubisoft were joined by three new game developers with their own presentations. However, Konami was only represented at E3 until 2013. Nintendo has also not held a press conference since 2013, but instead shows a pre-recorded video presentation via live stream.

Since E3 2014, Twitch has been broadcasting the press conferences of developers and publishers via live streaming on their platform. To this end, Twitch entered into a partnership with the E3 organizer, the “Entertainment Software Association (ESA)”.

E3 gained greater importance in 2015, since then, with Bethesda and Square Enix, two other well-known game developers and publishers have presented their games at E3 in their own press conferences. Since 2016 Electronic Arts no longer presents new games at E3, but at a separate event, the "EA Play", which takes place shortly before E3. Due to the press conferences held before E3, the press continues to count "EA Play" as E3.

In October 2017, the "ESA" introduced a new logo for E3, the old three-dimensional logo was replaced by a flat one with stylized graphics.

E3 2020 was canceled in March 2020 due to the COVID-19 pandemic . Instead, it should take place as an online event via live stream. At the beginning of April 2020, "ESA" also canceled the online event; instead, exhibitors are to present innovations in individual presentations. The next E3 in 2021 is to take place from June 15 to 17, 2021.