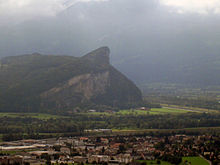 The Ellhorn is a striking, 758 m high Swiss mountain on the Alpine Rhine on the border between Liechtenstein and Switzerland . The Elltal separates the Ellhorn from the neighboring Fläscher Berg with the Regitzer Spitz .

Although not particularly high, the Ellhorn is a striking elevation in the Sargans area . The Ellhorn belongs to the municipality of Fläsch, the northernmost municipality of the canton of Graubünden, borders the Principality of Liechtenstein to the north and is bordered by the Alpine Rhine in the south . From the summit the view extends to the Falknis , Vilan , the Haldensteiner Calanda , the Black Horns , the Hochfinsler and the Gonzen .

In 1755, a raft that a Graubünden recruitment detachment was supposed to bring to the Netherlands as a rice walker crashed on the Rhine on the Ellhorn. All 100 people drowned.

From a military planning point of view, the fact that the Ellhorn belonged to the Principality of Liechtenstein in the immediate vicinity of the Sargans Fortress was a problem before 1948 , especially because it was feared that it would join Austria. As early as 1934, Colonel Genius Hans Luzi Gugelberg von Moos had suggested that an exchange of territory for the Ellhorn be undertaken with Liechtenstein. When the Federal Council wanted to implement this proposal in 1938, it was too late because Nazi Germany made sure that there was no land exchange.

The area of ​​the Ellhorn, which is strategically important for the Sargans Fortress, was acquired by Switzerland in 1948 through land exchange with Liechtenstein and immediately fortified with an infantry bunker (A 6229) ⊙ and a battle cavern (A 6224) ⊙ . From 1940 to 1985 the Swiss Army maintained the Tschingel artillery plant east of the Ellhorn , which tactically belonged to the Magletsch Fortress near Sargans . 47.04593 9.4808547.0541 9.47722

On August 15, 1949, the municipality of Balzers received 450,000 square meters of land from the municipality of Fläsch in the area of ​​the Mälsner Allmein and the Fläscher Riet as part of the Landabtauch. In addition, Switzerland released Liechtenstein debts of 1,800,000 francs and paid the municipality of Balzers an additional compensation of 412,000 francs. During the negotiations in 1948, Switzerland threatened to terminate the customs treaty, among other things. The treaty was approved by the Liechtenstein state parliament with 10 to 5 votes, although the population of Balzers voted against it on 21 November 1948 with 302 to 4 votes in a non-binding vote. The Liechtenstein government saw no possibility of renewing the customs treaty with Austria , which was terminated in 1918 . They feared resistance from the Soviet Union , which was one of the four occupying powers of Austria. Liechtenstein had angered them by accepting Russian refugees.

According to the legend, a dragon who ruled the Alpine Rhine lived on the Ellhorn .

In Diebsloch (in the local dialect as Diabalöcher called) hid in former times allegedly smugglers and thieves before the population of Balzers. It is located in the southern area of ​​the Ellhorn ⊙ , is exposed and difficult to reach. 47.04743 9.48242

Despite its low altitude, the Ellhorn has typical alpine species such as the fire lily , various gentians and the Turk's Union .

The almost 300-meter-high limestone rock face that slopes vertically towards the Rhine is ideal for climbing. Will climb even further southeast from the summit in föhnexponierten, rockfall endangered partly Motzen Tobel (also Mozentobel ) and in habitat Petit Verdon , both at the transition from Ellhorn to Fläscher mountain. The routes on the Ellhorn have levels of difficulty 5 to 8.