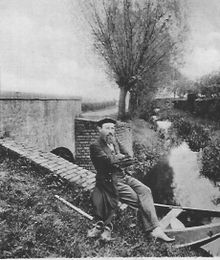 Erdmann Leopold Stephanus Emanuel Felke (born February 7, 1856 in Kläden near Stendal , † August 16, 1926 in Munich ) was a Protestant pastor who emerged as an advocate of naturopathy . He lived and worked from 1896 to 1914 in Repelen near Moers and from 1915 to 1925 in Bad Sobernheim , developed the Felke cure named after him and applied iris diagnostics ( iridology ). Felke is also considered the father of complex homeopathy.

Since the applications also included rubbing with clay and clay mud baths, Felke was often referred to as a clay pastor . Felke's regimens consisted of eating healthy and exercising outdoors. His patients received a low-meat diet, rubs in with healing clay, cold baths in zinc bathtubs outdoors and they had to sleep in light-air huts on the clay floor or on straw sacks.

Pastor Felke in Repelen in front of the linden tree

Felke, the son of a teacher and a pastor's daughter, had already been interested in medical questions while studying theology and had attended medical lectures for a few semesters. His interest was always in the area of ​​medicinal plants and the well-known alternative medicine specialists Hahnemann (the founder of homeopathy ) and Prießnitz ( hydrotherapy ). In his first pastor in Cronenberg , he treated the sick with homeopathic remedies during a diphtheria epidemic and was widely recognized by his patients. In 1894 he began his service as a pastor at the Protestant village church in Repelen. In 1896, some citizens of Repelen founded a homeopathic association to support Felke's work, as the latter usually gave homeopathic remedies free of charge. Felke is considered the father of complex homeopathy because he began to combine various active ingredients in chronic diseases with several symptoms, unlike Hahnemann. In 1897, Felke and some community representatives traveled to the Harz Mountains, where Adolf Just , another well-known natural healer of the time, had founded the Jungborn Kuranstalt in Eckertal to visit its facility. The visit must have made such a big impression that it was decided to create a similar facility in Repelen and later in Sobernheim as well .

Not far from the village church, a generous area of ​​meadows and arable land on the Repelner Meer was purchased for 50,000 marks (today almost 500,000 euros) and converted into a spa park with considerable personal contribution. In addition, there were 50 light huts as accommodations for 100 to 120 people and two pavilions as rest and reclining rooms. In 1898 the Jungbornpark, a park that is still popular today in Moers, was inaugurated. Since the bathing applications as well as sports and gymnastics were done without clothing, there were two separate bathing parks for men and women, surrounded by picket fences.

Felke started a real spa business first in Repelen, and later in Bad Sobernheim as well . While it was initially assumed that the original capacities were very generous, Repelen counted up to 400 spa guests in the season from May to October, so that many of them had to be accommodated in private pensions. The spa guests had traveled widely and came from the USA, Great Britain and Russia, among others. For the village this meant an enormous economic boom, especially in the hotel industry. The Jungbornhotel was established in 1914. The new movement, unfamiliar to the rural population, was also viewed very critically. Because of the nudity of the spa guests during the treatments, Felke was accused of endangering morality, which he vehemently opposed. When the requirement to increase the surrounding fences to three meters was not met quickly enough, the park was closed at short notice in 1899. The church superiors were also uneasy about Felke's activities. When asked, however, the community always confirmed that Felke also always fulfilled his pastoral duties.

This criticism did not prevent a real Felke movement from occurring. In the years up to 1914, Felke health resorts were established in Berlin , Aachen , Krefeld , Kettwig , Dortmund , Stettin and Benneckenstein in the Harz Mountains . These institutions were only allowed to use the name Repelner Method or Felke Method if they had received confirmation from Felke that they had been trained and approved by him. During this time, a large number of Felke associations (merged in the Verband der Felke-Vereine e.V. in Krefeld) with over 2500 members in Germany emerged. At the same time a Felke magazine was published. 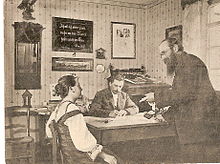 Pastor Felke in his office in Repelen

With the outbreak of the First World War, this development came to an abrupt halt. The spa facilities were now used as a hospital. In addition, Felke had to give up his pastoral office because of an affair in 1912 and was now without means because he continued to carry out his homeopathic treatments free of charge. So in 1915 Felke moved to one of his students in Sobernheim and built up a large spa there again. After the war, Felke came to Repelen every 14 days, but the health resort never regained the size it originally had. So the spa business was stopped, the Jungborn Society finally sold the hotel to an innkeeper and stopped its activities in 1934.

Felke worked in Sobernheim until his death and played a major role in making this place close to a successful health resort. Therefore he was awarded the honorary citizen . He died in 1926 and was buried in Sobernheim.

Later, a memorial was erected in his honor and a small Felke Museum in Moers-Repelen. The Emanuel-Felke-Gymnasium in Bad Sobernheim has been named after him since May 15, 1996 .

A barefoot path was set up in Bad Sobernheim in 1992 , based on suggestions from Felke. This 3.5 km long circular route leads through various stations such as natural stones, pebbles, wood, clay pools, water, balancing stations and grass areas, so that the senses, the foot reflex zones and the musculoskeletal system are activated. A similar path is also laid out at the museum in Moers-Repelen.

A number of Felke associations still exist today. Bad Sobernheim is still the center of the Felke cures with three spa facilities, which also exist in Diez an der Lahn and Meddersheim . Both clay cures (see peloid therapy ) and eye diagnostics have become an integral part of treatment practice in naturopathic practice at the beginning of the 21st century. The Felke Institute for Iridology has existed since 1984. Furthermore, there is a medical working group for Felke therapy and a manufacturer of homeopathic complex medicines, Hevert-Arzneimittel GmbH & Co. KG, based in Bad Sobernheim.

Felke was known for his eye diagnostics . The procedure was controversial from the beginning and is still not recognized by medicine due to a lack of empirical evidence. Felke was charged with bodily harm and most recently with negligent homicide in a total of 16 trials, but was always acquitted. In the last trial, which took place in 1909, Felke, under the supervision of a number of sometimes prominent medical professionals , including the surgeon Carl Garrè , had to diagnose 20 patients using only the irides. Felke protested because he was not allowed to speak to the sick, as he usually did to establish the anamnesis. How many diagnoses were correct is not known; but he was able to convince the judges.

The applications were supplemented by an almost meat-free diet with lots of vegetables, green spelled, potatoes and fruit, through which Felke wanted to detoxify the body due to malnutrition. Felke sometimes differentiated the diet depending on the clinical pictures of his patients.

Like Kneipp, Prießnitz, Rikli, Kuhne and Just, Felke belongs to the ranks of important lay practitioners who gave natural medicine decisive impulses at the beginning of the 20th century. Incidentally, Felke never made a secret of the fact that he did not consider himself the inventor of a healing method. “It was homeopathy that won me over with its simplicity and uniformity in therapy. It is the backbone of my whole method ... “Felke's ideas also inspired pharmacist Friedrich H. Pascoe, who took over Mellinghoff's pharmacy in Mülheim an der Ruhr in 1895. From this cooperation later the Pascoe pharmaceutical preparations GmbH emerged, which is still run as a family business today and is dedicated to natural medicine and complex homeopathy.

While Pastor Felke initially prescribed mostly individual homeopathic remedies, he later, based on his practical experience, came up with a compilation of his homeopathic complex remedies, which he used almost exclusively for the last ten years. He started from the principle that a treatment leads to the goal most quickly if the "disease complex" present in most patients is met with a "drug complex".