Polarization microscope image of a liquid crystal: Schlieren - texture of a nematic liquid-crystalline phase, as it is also used in liquid-crystal screens

In addition to the low molecular weight liquid crystals known since the late 19th century, liquid crystalline polymers and elastomers were discovered in the second half of the 20th century .

Usually, liquid crystal means thermotropic liquid crystals . When certain substances are heated during melting, these occur as an intermediate phase ( mesophase ) between the solid and the liquid phase . A substance can form several different liquid-crystalline phases one after the other as the temperature increases.

There are also lyotropic liquid crystals . These form when amphiphilic substances (such as surfactants ) are dissolved in a solvent (e.g. water). With a suitable concentration of the amphiphile, submicroscopic structures such as vesicles and micelles are formed , which arrange themselves symmetrically in the solvent and thus form an anisotropic liquid.

The first description of a liquid crystal goes back to Friedrich Reinitzer . In 1888 he described the colorful appearance when cholesteryl benzoate , the benzoic acid ester of cholesterol, melted and solidified . He noticed that this compound already became liquid at 145.5 ° C, but the polarization microscopic birefringence or milky-cloudy appearance persisted up to 179 ° C. A crystal-clear, "normal" liquid was only created at temperatures above 179 ° C. Thereupon Otto Lehmann examined these as well as other substances and spoke of "flowing crystals" for the first time . In the 1920s, the first fundamental research on liquid crystals was carried out by Georges Friedel and Daniel Vorländer . The liquid crystals only became of technical interest through the discovery of electro-optical switchability by George H. Heilmeier .

H. Kawamoto wrote a review article on the history of LCDs. A compendium with 46 classical works on physics, chemistry and application technology of the “Crystals that Flow” with an overview is from Sluckin et al. (see section 6). In the Karlsruhe Institute of Technology there is a permanent exhibition on the history of liquid crystals "From cholesterol to flat screens" in front of the Otto Lehmann lecture hall of the Physics Institute , and an extensive list of publications can be found under "History" on the website of the German Liquid Crystal Society (web links on this in Sect. 8).

Liquid- crystalline phases, also called mesophases , together with the conformationally disordered crystals and the plastic crystals, form their own physical state , which is called the mesomorphic state . A compound that shows a liquid crystalline phase is called mesogenic . If this mesophase is a nematic phase (from ancient Greek νῆμα nema “thread”), the compound is called nematogenic , if it is a smectic phase , smectogenic .

The formation of lyotropic mesophases requires the presence of a solvent and is also dependent on its concentration.

The arrangement of the different phases of a liquid crystal that occur depending on the temperature is called polymorphism .

The anisometry of the structural units that form it is a prerequisite for the formation of a liquid-crystalline phase . The vast majority of researched liquid crystals (including those in liquid crystal displays ) have a rod-shaped (kalamitic) molecular shape.

But many other forms are also possible, e.g. For example: discoid (disc-shaped), pyramidoid (bowl or cone-shaped), sanidic (board-like), polycatenare (kalamitic with several flexible chains at one or both ends) or curved (banana-shaped) molecules.

There are various thermotropic liquid-crystalline phases, which differ significantly from one another in terms of their microscopic structure and macroscopic appearance. B.

The nematic phase of achiral mesogens is the simplest type of liquid crystalline phase. In it, the molecules have an order of orientation with respect to a so-called director , the unit vector of direction. The resulting preferential orientation is usually constant only for small volumes. The molecular centers of gravity are statistically distributed in the same way as liquids: There is no long-range position order . Most nematic phases are uniaxial, since 2004 thermotropic biaxial nematic phases have also been known. Typical textures of nematic phases are thread or streak textures .

An order parameter S can easily be calculated for nematic phases :

where the angle θ describes the orientation of a selected molecule to the preferred orientation; the angle brackets mean an averaging over the orientation distribution of all molecules. The order parameter can have values ​​between −0.5 and 1. S = 0 indicates a lack of preferred orientation (corresponding to an isotropic phase), S = 1 means a completely parallel alignment of all molecules (an ideal state). S = −0.5 corresponds to an orientation distribution of the molecules similar to the bristles of a bottle brush. However, negative order parameters have not yet been found experimentally. The order parameter shows a strong temperature dependence. On approaching the clearing point (temperature of the transition from a mesophase to the isotropic phase) it quickly approaches zero. - The molecules of a nematic phase can be easily reoriented by an electric field. This is used in LCDs.

There are basically two different types of nematic phases: uniaxial and biaxial nematic phases. The term uniaxial means that there is only one optical axis in the material along which polarized light can penetrate the sample without changing its polarization state. This results from the fact that the indicatrix of such phases represents an ellipsoid of revolution. This indicatrix indicates the dependence of the refractive index on the direction. Analogously, there are two optical axes in biaxial nematic phases, since the indicatrix is ​​not an ellipsoid of revolution, but a general ellipsoid. 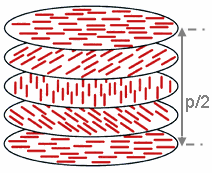 The cholesteric phase shows a nematic order with a continuously rotating preferred orientation. This results in a long-range helical superstructure with a periodicity of typically a few 100  nanometers .

The resulting continuously twisted optical medium acts as a one-dimensional photonic crystal with a photonic band gap for circularly polarized light with the same handedness as the helical order. Cholesteric liquid crystal films therefore show selective reflection of circularly polarized light. In contrast to reflections on metallic or conventional dielectric mirrors , the handedness of the circular polarization is retained.

There are various smectic phases. In the order in which they were discovered, they were referred to as smectic A, smectic B, etc. (abbreviated to SmA, SmB, ...). From the large number of smectic phases of earlier years, only five remained after more detailed investigations (SmA, SmC, SmB, SmF and SmI). The others (formerly SmE, SmG, SmH, SmJ and SmK) turned out to be soft crystals - "disturbed crystals with pronounced deformability" - and are now referred to as crystalline phases. The smectic D-phase turned out to be a three-dimensional mesophase with a cubic superstructure . Together with the liquid crystals, they belong to the soft matter .

In smectic phases, the molecules are arranged in layers in such a way that they form a one- or two-dimensional periodic structure. They are divided into smectic phases of disordered layers (SmA and SmC) and hexatic phases (SmB, SmF and SmI) according to the degree of order within the layer .

While in the SmA phase the longitudinal axes of the molecules are on average perpendicular to the layer, i.e. run parallel to the normal layer , the central longitudinal axis of the molecules in SmC phases is inclined to the layer normal. In these two mesophases, the molecules within the layer have no long-range position order - one could speak of a two-dimensional liquid. The classic polarization microscopic appearance of SmA and SmC phases is a fan or polygon texture . SmC phases often also show streak textures . If you look at thin, free-standing films, the SmA phase appears black, while the SmC phase shows streak textures and defects.

In contrast to this, the hexatic phases have a hexagonal positional order and a long-range order of the unit cell ( bond orientational order ). Similar to the SmA phase, the SmB phase is composed of molecules perpendicular to the layer, while these are inclined in the SmI and SmF phases.

The characteristic of columnar phases is the formation of columns of stacked disc-shaped, wedge-shaped, polycatenary or similar. Mesogens. Long-range positioning can occur along the columns (e.g. in the columnar-hexagonal-plastic phase). The parallel arrangement of the columns results in a two-dimensional packing perpendicular to the longitudinal axes of the columns. In the columnar-hexagonal-plastic phase of z. B. triphenylene systems a three-dimensional order occurs (the molecules can only rotate freely in their places). Depending on the nature of this packing, a distinction can be made between oblique , right-angled or hexagonal columnar mesophases. Characteristic textures are mosaic textures or textures from circular domains .

The term discotic for columnar is outdated and should only be used for mesophases of disc-shaped liquid crystals.

There are various lyotropic liquid-crystalline phases, which differ from one another by their microscopic structure and their macroscopic appearance, e.g. B.

Nematic lyotropic mesophases have only been known since 1967. They only occur in a few lyotropic systems. In most cases, induction of the nematic phase by adding cosurfactants or electrolytes is necessary. A few exceptions are known where binary surfactant / water mixtures have a nematic phase:

In surfactant / water systems with medium mixing ratios (about 50% by weight surfactant), phases with unusually high viscosity are often observed, which usually indicates a hexagonal phase. In many cases, the area of ​​existence extends over wide temperature and concentration ranges. The hexagonal, distant-position aggregates are circular or oval-cylindrical rods. The long-range position order consists of an arrangement of the aggregates in a hexagonal grid, i. H. each aggregate is surrounded by six more in a hexagonal close packing.

Liquid crystals, especially of the thermotropic nematic phase, are used in LCD screens .

In addition, there are a number of uses in other areas that take advantage of changes in various properties of the liquid crystals with physical parameters (temperature, pressure, etc.). For example, color changes of cholesteric phases depending on the temperature can be used for medical or technical purposes (adhesive temperature sensors show reversible or irreversible color changes at defined temperatures): The so-called hot-spot analysis is used to search for defects in semiconductor components by measuring the heat distribution e.g. B. is made visible by integrated circuits through the polarization of liquid crystals. Components and heat sinks in closed devices can be checked for their maximum temperature. The surface temperature can be tracked by means of attached sensor foils without having to make contact with a thermometer. Such sensor foils are often equipped with several surfaces that are spaced apart by z. B. react 5 Kelvin in the form of a scale with a color change. There were even living room thermometers in which a sensor film in the form of a scale with a range of 25 ° C was installed. Because of the color change, these were often jokingly called "mood thermometers".

Furthermore, mesophase tar is used as a starting material for the production of carbon fibers (so-called pitch fibers, tar fibers or pitch fibers).