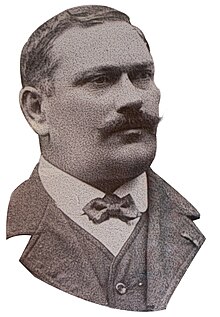 François Baco (born May 11, 1865 in Peyrehorade , † March 17, 1947 in Labatut ) was a French teacher and vine grower. Some of his most successful breeds still bear his name today.

In Lesperon , Villeneuve de Marsan , Dax , Labatut, Soustans , Morceux and later in Bélus in the Landes , Baco first gave school lessons. Through Duffour-Bazin he got involved in the fight against phylloxera , which had threatened the local vineyards since 1880. With Lucien Daniel he learned the professional grafting of European noble vines on American rootstock .

With the occurrence of the fungal disease black rot of the vine in 1896, he began to breed fungus-resistant hybrid vines . He fertilized over 1200 inflorescences according to a system and finally planted over 50,000 seeds on the estate of his friend Jules Darrignan, Grand Boué in Labatut. In several years of controls, Baco selected approx. 7000 plants from the more than 50,000 seedlings, of which hardly more than 10 varieties were marketed from 1912 onwards.

The most important breeds

Due to the sensitivity to the golden yellow yellowing (French: Flavescence dorée), their share also decreased sharply. François initially marketed the grape variety under the name Maurice Baco, in memory of his son who died at the age of 17.