Scene of the Frankenburger dice game

The Frankenburg dice game in 1625 was the prelude to the Upper Austrian Peasants' War and took place against the historical background of the Counter Reformation . The setting was Haushamerfeld in Pfaffing , which at the time belonged to the County of Frankenburg. The term " dice game " is not contemporary, however, but only came up in the 19th century. The dice in the local coat of arms symbolize this process. 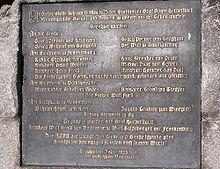 Memorial stone at the scene of the Frankenburg dice game

In 1620, at the beginning of the Thirty Years' War , Upper Austria was pledged by the Habsburgs to the Bavarian Duke Maximilian I for lack of financial resources for the war chest . In the period that followed, Maximilian sent not only numerous tax officials but also Catholic clergymen to Upper Austria, who were supposed to enforce the Counter Reformation there in accordance with the legal principle of Cuius regio, eius religio . When a Catholic priest was to be installed in the Protestant parish of Frankenburg in May 1625 , an armed uprising broke out. The pastor was chased away and the county keeper was besieged in Schloss Frankenburg . After being promised mercy, the insurgents gave up the siege.

Memorial at the scene of the Frankenburg dice game

The Bavarian governor in the land of the Enns , Adam Graf von Herberstorff , also promised mercy when he summoned all male residents of the county to Haushamerfeld , between Frankenburg and Vöcklamarkt , on May 15, to hold court over the rebels . A total of around 5,000 men were rounded up there, among them the 36 alleged ringleaders of the Franconian uprising. These were shielded by Bavarian soldiers and Herberstorff informed them that they were sentenced to death . Herberstorff, however, had half of them " pardoned ", for which he let the 36 victims die in pairs for their lives. 16 losers in the dice game that followed were hanged , and two other losers were pardoned. An assistant dyer was later caught and also hanged, so that a total of 17 men were judged.

This drastic punitive action did not have the effect Herberstorff had hoped for, but rather triggered a carefully planned peasant uprising in Upper Austria that broke out in May 1626.