Coat of arms of those of Freyberg

Origin of the Freyberg-Eisenberg line

Heinrich von Freyberg (* around 1310, † after 1371) now called himself "zu Angelberg". He had two sons, who in turn were given the first names Heinrich and Friedrich. Heinrich continued the Angelberg line.

He was married to Anna von Hohenegg- Eisenberg by 1376 at the latest . But he was not enfeoffed with the rule of Eisenberg at this time. In 1383 or 1384, his father-in-law Bertold von Hohenegg (zu Eisenberg) died. Since the mother-in-law Anastasia von Randegg wanted to enter into another marriage, Friedrich von Freyberg had to compare himself with her in 1387 because of her genetic makeup. At this point in time, Friedrich was still not enfeoffed with the rule of Eisenberg. In the document he called himself “Fridrich von Fryberg staying setzhaft ze Burgrieden ” .

Only after the liege lord of the Eisenberg rule, Duke Leopold III. of Austria, had lost his life in the battle of Sempach in 1386 and his brother Albrecht III. Friedrich von Freyberg became the lord of Eisenberg Castle .

Wilhelm von Freyberg's heir was his son Peter von Freyberg-Eisenberg († 1530). In 1525, the rebellious peasants looted and set fire to his castle.

The Eisenberg tribe split under Peter's sons: Werner Volker (* around 1488, † April 11, 1574) retained the rule of Eisenberg (or whatever was left after the previous divisions) and continued the Freyberg-Eisenberg line to Eisenberg. Eberhard († March 28, 1564) founded a second line of the family in Raunau, which must be called Freyberg-Eisenberg zu Raunau. She has in his son Karl († April 17, 1613). the grandson Markus Sittich and the great grandson Hans Dietrich (* 1608, † May 14, 1690) continued.

The aforementioned Werner Volker called himself von Freyberg (-Eisenberg) zu Hürbel and Asch. He or his two sons Werner Hektor († before 1596) and Heinrich Volker († 1596) extended his three dominions to include the rule of Unterdiessen.

Since Heinrich Volker remained without an heir, his brother's children shared the shares that belonged to them in the four dominions:

Lineage of the Freyberg-Eisenberg family 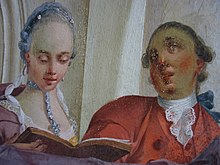 His son Clemens Karl, on the other hand, got into great debt and had to cede his share of Landstrost and Offingen to Freyberg-Eisenberg zu Haldenwang.

Since debts accumulated again after this sale, his son Joseph Friedrich (* July 29, 1790, † May 17, 1864) was forced to sell the Niederraunau estate. He lived in Augsburg and died in Füssen, where his son Joseph August (* January 30, 1850, † March 18, 1920) married into the Eschach estate. He also owned the site of the former Eisenberg Castle and the associated forests.