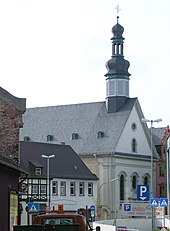 The Friedrichskirche is a Protestant church in Worms , built between 1741 and 1744 . Originally built for the Reformed congregation, the church has been used for uniate worship since the Rhenish Hessian Church Union in 1822 , today in the Evangelical Church in Hesse and Nassau . The church named after Frederick the Great is a listed building .

Reformed residents can be traced back to Worms in the first half of the 16th century. However, they did not have a say, guild or civil rights in the city ​​controlled by the Lutheran city ​​council . The city council had to tolerate a first Reformed community from 1644 to 1650 under pressure from the French occupation . After their departure, the congregation was dissolved again, and the Reformed Worms joined the congregation in the neighboring Electoral Palatinate Neuhausen in 1654 , with their own presbytery .

It was not until 1699, ten years after the city's destruction in 1689 in the course of the Palatinate War of Succession , that this presbytery was able to conclude a treaty on the reformed practice of religion with the city council. In return for the payment of 10,000 guilders , Reformed people were admitted as citizens of the city and in the guilds, and the Reformed community was allowed to run its own church and school. At the same time the priority of the Lutheran confessions was established and the Reformed were excluded from the city government. With the contract, the city council, despite theological concerns, followed a recommendation by council member Johnn Friedrich Seidenbender , who hoped that the admission of the Reformed would lead to an economic upswing in the city.

In 1699 the Reformed congregation bought a building site for the church and school, on which they had a wooden makeshift construction erected, which was inaugurated on January 1, 1700. She built her school and community center on the property to the north. By 1740 the wooden church had become so dilapidated that a new church was necessary.

Johann Georg Baumgratz , an engineer from the Electoral Palatinate who was based on the Mannheim garrison church , was commissioned to plan the new building . The building, valued at 17,300 guilders, was financed by collections , especially in Prussia , which Frederick the Great personally approved. On June 9, 1744, after three years of construction, the church was consecrated and named after the Prussian king, who was represented at the festivities by court and church councilor Carl Philipp Menzel.

On February 21, 1945, the church burned down to the surrounding walls after an air raid on Worms . It was restored in simplified, more modern forms from 1953 to 1955. 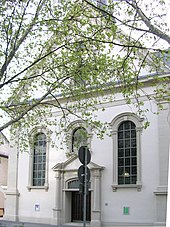 The church presents itself as a simple, east-facing baroque hall with a roof turret. The three-axis façade on Römerstrasse is framed by pilasters. In the lower area of ​​the middle of the three arched windows there is a portal framed by half columns and crowned with a gable roof . The large triangular gable above is closed off at the bottom by a ledge at eaves level of the Red House adjoining to the south . A two-story roof turret with a bell house, lantern and dome closes the building off at the top. An archway connects the church with the former school building to the north.

Originally the interior of the church was designed as a simple sermon church , with the altar in the middle of the church space in front of the pulpit on the south wall, towards which the pews and the three-sided gallery were aligned. In 1771 a silent organ was set up on the west gallery above the entrance . In 1900 the altar and pulpit in the uniate church since 1822 were relocated to the east and the pews were realigned. This orientation was also retained in the reconstruction after the Second World War by the Worms architect Hans Bössler: the benches in four blocks face the slightly raised chancel in the east, on the west side there is a gallery for the choir and organ.

In 1767 the Reformed congregation ordered an organ from Johann Philipp and Johann Heinrich Stumm , which was installed on the reinforced west gallery in 1771. This organ was completely destroyed in a fire in the church in 1945. In 1955 the organ from the Dreifaltigkeitshaus, the parish hall of the Dreifaltigkeitskirche , was installed in the church as a temporary arrangement. This temporary solution was overhauled in 1983, but had to be retired in 2002. It was replaced by the organ in Frankfurt 's Markuskirche , which was built in 1955 by Paul Ott and for which a new location was sought due to the conversion of the Markuskirche to the EKHN Annunciation Center . The mechanical slide organ comprises 30 registers on two manuals and a pedal.

The ringing of the Friedrichskirche consists of five bells cast in 1955 by the Rincker Bell and Art Foundry . Its sound is matched to the bells of the Trinity Church . The bells sound in the notes a 1 , b 1 , d 2 , e 2 and f sharp 2 .