The former inn "Zum Russen" is in the Oberlößnitz district of the Saxon town of Radebeul , in Hauptstrasse 47 immediately south of the former Oberlößnitz town hall (before 1933 Russenstrasse after the inn). The name of the building, which was previously built as a winegrower's house, refers to the innkeeper Demian Zarenkow from Russia, who acquired the property in 1806, the year of the Peace of Poznan and the elevation of Saxony to the Kingdom of Saxony . 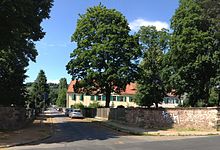 Former inn "Zum Russen", from the intersection of Hauptstrasse / Maxim-Gorki-Strasse

The "former inn in the core ( Winzerhaus ), with south vorgelagertem outside space including trees (former wine plant ) and Eckeinfriedung " on a corner lot to Maxim Gorky Street (1934-1945 Russians Street ) located, is now under monument protection . The two-storey, five-axis core structure has a high, tiled hipped roof , with a triangular gable with a horizontal oval window in the main view to the south. There are three bat dormers around the triangular gable . On both sides of the core building two later added two-storey and two-axis wing structures with a lower, hipped roof ridge , each with a bat dormer in the roof , extend .

The ground floor of the building is massive, the upper floor is half-timbered . The normally rectangular windows are complemented on the south side in the middle of the ground floor by the arched former main entrance, accompanied by a double arched window. All windows are accompanied by folding shutters . The plastered facades of the original building are adorned with illusionistic painting . There are barrel-vaulted former wine cellars under the building .

On the east side of today's residential complex, the demolished hall extension was added again for residential purposes.

The core of the building was built as a half-timbered winegrower's house at the end of the 17th century. He is shown on the loessnitz map by Hans August Nienborg from 1714. A deed of purchase from 1735 mentions, among other things, “... a good press , a muscatel press and a walled-in copper kettle for the Akant ...”, from whose plant roots fermentable sugar was made. At this time, the wing structures with a lower ridge height were added on both sides.

The Russian Demian Zarenkow acquired the winery in 1806, which he managed as a winery and schnapps distillery for eleven years. In 1814 he also received a license for beer, brandy and coffee.

Numerous changes of ownership followed after Zarenkow. In 1861 the hall was added on the east side, which was demolished again in the mid-1990s. The Medical Association of Natural Scientists met there in the 19th century . In the late 19th or early 20th century was made a "stylish expansion," the hall with stage had a coffered ceiling painting, even richer with cartridges but was decorated the Swedish salon in the western part of the building (including the guest room "Weinklause" ).

The last innkeeper, Paul Korn, gave up the pub in 1964 (or 1968). During the subsequent use of the property by VEB Geflügelanlagenbau, the creeping decline began, which could only be stopped with the renovation and restoration of the building from 2005. All the auxiliary buildings were demolished and large roof structures were added to the main building at the rear facing north. The music pavilion in the park no longer exists either. The former inn building is now used as a residential building.