The Mimulus ( Mimulus ) are a plant genus . The genus was traditionally / formerly part of the fig family (Scrophulariaceae). In the current system, which is based on gene sequence analysis, the genus is in the Phrymaceae family . The species belonging to the juggler flowers ( Mimulus ) are of various shapes . 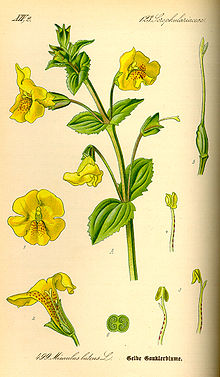 Most of the Mimulus species are annual to perennial herbaceous plants . Only a few species are subshrubs that have a woody base. As a rule, these are land plants, but there are also aquatic plants, both those with submerged leaves and those with leaves raised above the water. There are erect growing species as well as prostrate and creeping ones. The stems are round to square and winged in cross-section. The plants can be hairy or hairless. The leaves are opposite . In most species, the leaves are broadly oval to rounded in shape with a blunt tip. The leaf margin can be whole or toothed.

The flowers are solitary or in racemose inflorescences at the shoot ends or individually in the leaf axils.

The hermaphrodite, zygomorphic flowers are five-fold. The green calyx tube, which is always shorter than the corolla tube, ends at the front with five lobes. It is five-ribbed, the ribs often protruding, sometimes even slightly winged. The petals are fused into a corolla tube (it can be tubular to bell-shaped), which ends with two lips. The lower lip consists of three lobes, usually flat forwards or slightly downwards, which provide a good landing spot for pollinating insects. The upper lip consists of two mostly upright to back-curved lobes. In many species the lobes of the two lips are rounded, but there are also completely different shapes. However, the lower lip is always bulged upwards on the left and right at the entrance to the corolla tube, but in most species the throat is not closed by these bulges. The scar is bilobed and the two lobes collapse quickly when touched. There are yellow, red, pink, purple and blue flowers. The ovary usually consists of two fused carpels .

There are fruit capsules formed that contain tiny seeds.

Most species grow in humid locations, such as in forests, on the edges of forests and near rivers.

Many species and their hybrids are cultivated as ornamental plants. Some of them have run wild in different parts of the world. 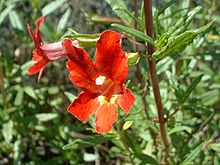 The genus Mimulus consists of around 150 to 170 species. Here is a selection:

No longer counted in this genus: