This article is about two string quartets. For two companies of the same name, see GEMÜ Gebr. Müller Apparatebau and Gebr. Müller Griesheim .

The Müller brothers in 1832

The first quartet consisted of the four sons of the Braunschweig chamber musician Aegidius Müller (born July 2, 1766 near Görsbach near Nordhausen , † August 14, 1841 in Braunschweig), who initially trained them. The quartetists worked at the Braunschweig Opera House .

The first quartet ended in 1855 with the deaths of Georg and Gustav. 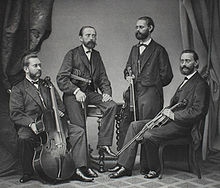 The second quartet was formed by four sons of Karl Friedrich and existed from 1855 to 1873.

After a visit to Braunschweig in 1843, the French composer Hector Berlioz said about the quartet and the orchestra: “I must say at this point that, until this day, I have never been in France, Belgium, or anywhere else in Germany had seen outstanding artists gathered who would have been so devoted, attentive and enthusiastic about their task ... ”.