This article describes the violinist Carl Moeser. For the architect see Karl Moeser . 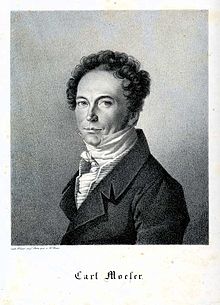 Carl Moeser, lithograph by W. Beise after a drawing by Franz Krüger , 1824

Moeser's father was a Hautboist (military musician) in the Ziethen Hussar Regiment. He also gave his son Carl his first music lessons. He later received violin lessons from the chamber musician Johann Böttcher and gave his first concert in April 1784. In 1788 King Friedrich Wilhelm II recommended him to Margrave Friedrich Heinrich von Schwedt , who accepted him into his chapel, but died shortly afterwards. Moeser returned to Berlin, found a wealthy patron in the Baron Bague from Paris and received further training from the concertmaster Carl Haack in order to finally become a member of the Royal Orchestra on January 1, 1792. Due to his outstanding skills, the king drew him in to his private string quartet evenings, in which he played the cello himself .

Several love affairs, some with members of the nobility, led to Moeser being banished from Prussia and taking up residence in Hamburg . There he made the acquaintance of Ignaz Fränzl , Pierre Rode and Giovanni Battista Viotti . Guest performances took him to Copenhagen and London , where Johann Peter Salomon wanted to hire him. This did not happen, however, because Moeser entered into a love affair with an Italian and left London with her.

In 1797, after the death of Friedrich Wilhelm II, Moeser was allowed to return to Berlin and received his previous position in the Royal Chapel. Prince Louis Ferdinand , with whom he often played music, soon became one of his closest friends .

In 1803/04 he took a long trip to Vienna and was able to inspire Haydn and Beethoven with his playing . There he also met the violinists Ignaz Schuppanzigh and George Polgreen Bridgetower , and on April 26, 1803, he performed in a private concert by Prince Joseph Lobkowitz - together with the harpist François-Joseph Naderman and Ferdinando Paër on the piano.

When the war required a reduction in the chapel in 1806, he left Berlin again and traveled to St. Petersburg via Warsaw . In 1811 he returned to Berlin. In 1813 he founded his own string quartet, with which he performed the works of Haydn, Mozart and Beethoven in particular. On April 22, 1813, he married the Italian harpist Caroline Delphine Longhi. The marriage does not seem to have been a happy one, because she left Berlin again in 1825, probably after a previous divorce. His second wife became the singer Louise Moeser. With her he had the son August Moeser, who was born on December 25, 1825.

In the story The Baron von B. von ETA Hoffmann , which appeared in the collection Die Serapionsbrüder in 1820 , Moeser appears in the form of the young violin virtuoso Carl.