History of the fertilizer

The history of fertilizer begins with the conscious introduction of substances by humans in agriculture .

Agricultural fields were already fertilized in ancient Egypt , initially naturally through the Nile mud, from around 4000 BC. BC in many regions also specifically sprinkled with animal and human feces to increase the harvest . The Romans and also the Celts began to use carbonate of lime and marl as fertilizers.

The necessary nitrogen was supplied to the arable soil in the form of manure , harvest residues and through a certain crop rotation with legumes ( green manure ) without people being aware of the exact relationships. It was not until 1840 that the chemist Justus von Liebig was able to demonstrate the growth-promoting effects of nitrogen, phosphates and potassium . For example, nitrogen was initially obtained in the form of nitrates primarily through the use of guano , a substance that is formed from the excrement of sea birds. Since the natural reserves of mineral fertilizers are limited and most of them had to be imported from South America, a method of producing nitrogen compounds synthetically was considered . 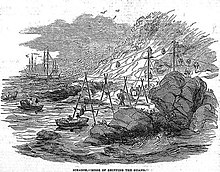 Shipping of guano in the 19th century 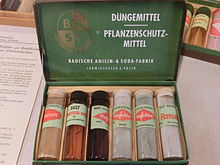 Fertilizers and crop protection products from BASF; Exhibit in the Upper Swabian Museum Village of Kürnbach

Between 1905 and 1908, the chemist Fritz Haber developed the catalytic synthesis of ammonia . The industrialist Carl Bosch then succeeded in finding a process that enabled the mass production of ammonia. This Haber-Bosch process formed the basis for the production of synthetic nitrogen fertilizers. In 1913, BASF commissioned a plant based on the Haber-Bosch process at the Ludwigshafen-Oppau plant for the first time .

The discovery of the Edaphon in 1922 by the microbiologist Raoul Heinrich Francé made it possible to look for alternatives.

Erling Johnson invented another chemical process for the production of fertilizers in 1927 in the Odda smelting works (Odda Smelteverk), which is accordingly called the Odda process .

Since the Second World War , the industry has increasingly brought fertilizers with different compositions onto the market. This development was favored by inexpensive crude oil , which served both as an energy source for driving machines and as a raw material in the chemical industry. At the same time, alternatives such as biodynamic agriculture and other forms of organic agriculture developed . However, the credibility of biodynamic agriculture, which Rudolf Steiner refers to, was repeatedly called into question due to the lack of scientific foundations.

Annie Francé-Harrar , a well-known author who continued part of his life's work after the death of Raoul Heinrich Francé in 1943, initially found little approval in the professional world. Since 1959 she has tried in vain to find a publisher to publish an illustrated “Handbook of Soil Life”. But even after her death, none of the relevant specialist publishers showed any interest in the results of their research work. This book could not appear until 2011.

In the last quarter of the 20th century , however, the mineral fertilizer came under increasing criticism because its excessive use often causes ecological damage. Since the 1980s, the consumption of mineral fertilizers has declined in many countries. Nevertheless, the problem of groundwater pollution with nitrates, for example in Germany, has not yet been resolved.

The importance of the earthworm was only paid attention to in science relatively late.

Increasing prosperity led to a change in eating habits and, since around 2013, to increasing use of fertilizers.