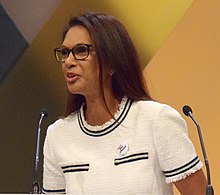 Gina Miller (* 19th April 1965 in Guyana as Gina Nadira Singh ) is a British fund manager and political activist . She became known in 2016 when she asserted in a lawsuit before the UK Higher Civil Court that the British Parliament should be more involved in the Brexit negotiations. In September 2019, she successfully sued the Supreme Court against Prime Minister Boris Johnson's five-week leave of absence from the British Parliament . The unanimous and clear decision of the judges made British legal history.

Miller is the daughter of Savitri and Doodnauth Singh, a chief prosecutor from Guyana who was originally from India . She came with ten years to a boarding school in southern England (Moira House, Eastbourne ) and studied at the University of London law to the bachelor's degree and then Business Administration (marketing, human resources). At times, when their parents could not afford the boarding fees, she worked next to the school as a hotel employee was while studying at times model and later independently . She married, temporarily moved to Bristol after dropping out of law school (where she and her husband ran a real estate photo agency) and had their first child at the age of 20. In her second marriage, she married a banker, from whom she later divorced.

In 2009 she and her third husband, Alan Miller, founded the asset management company SCM Private , which specializes in exchange-traded funds (ETF). In the City of London she is known for campaigns ( True and Fair , since 2012) which, to the displeasure of many fund managers, drew attention to the high hidden fees of many investment funds and advocated more transparency. That gave her the nickname Black Widow in city circles . She was also active as a fundraiser, for example for the Royal Hospital Chelsea . She founded her True and Fair Foundation as Miller Philanthropy in 2009.

In November 2016, she won a lawsuit before the Higher Civil Court by successfully challenging the legality of the Conservative Prime Minister Theresa May's actions to pursue Brexit , which was supported by a referendum , on her own authority (through her royal legitimation as Prime Minister) without voting with and without majority approval in parliament. Essential rights of British citizens would be affected and this, in the opinion of the plaintiffs and the court, required the passage of a law and approval in parliament (in which the Brexit opponents had a majority before the referendum). According to the plaintiffs, the Prime Minister's approach to triggering Brexit without the formal consent of Parliament would have set an undesirable precedent, which would have expanded the power of the executive too much at the expense of the legislature and would have been on the verge of dictatorship .

As a result of her complaint, she was threatened in social networks (including death threats , after which she received constant police protection) and was exposed to intimidation, which also led some of her colleagues to withdraw from the public discussion. She originally led the lawsuit, which was funded by crowdfunding , with the London hairdresser Deir Dos Santos, who originally came from Brazil , and the People's Challenge Group of IT consultant Grahame Pigney, who lives in the south of France . As the remaining main plaintiff, Miller financed the legal dispute to a large extent herself.

In interviews, Gina Miller also emphasized that her campaign was less against Brexit itself (which the decision had already been made on), but rather its form. The government announced a revision before the Supreme Court of the United Kingdom . The plaintiffs were represented by the law firm Mishcon de Reya . On January 24, 2017, the Supreme Court's decision upheld the decision of the Supreme Court and is therefore final.

In September 2019, she sued the Supreme Court against the UK Parliament's five-week leave of absence shortly before Brexit, after her lawsuit had previously been dismissed in the UK High Court on the grounds that it was a political decision. The Scottish Supreme Court ruled that the leave of absence was illegal. The eleven judges of the Supreme Court unanimously ruled on September 24th that the leave of absence was against the law. Boris Johnson's government arguments were rejected on every point. The ruling was a heavy defeat for the prime minister and is considered a fundamental ruling for the relationship between government and parliament. She was assisted in the lawsuit by former Prime Minister John Major and represented by attorney David Pannick .

She lives in her third marriage to her husband Alan Miller, who started out in 1997 as one of the first hedge fund managers in the City of London, which is why he is nicknamed Mr. Hedge Fund there, and by 2006 had a fortune of £ 30 million in the City of London had built. The current portfolio of Gina Miller's fund is around £ 100 million (2016). She has a disabled daughter from her first marriage and two children with her third husband.

In 2018 she published her autobiography ( Rise: Life Lessons in Speaking Out , Canongate).