Coat of arms of the governorate 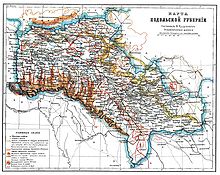 The governorate of Podolia ( Russian Подольская губерния / Podolskaja gubernija ) was located in the southwest of the Russian Empire in the general governorate of Kiev and was bordered by the governorates of Volhynia , Kiev , Cherson and Bessarabia and the Austrian crown lands of Galicia and Bukovina . Nowadays it belongs almost entirely to Ukraine (especially Vinnytsia Oblast and Khmelnyzkyj Oblast ), only a few corners north of the Dniester belong to the Republic of Moldova ( Transnistria ).

The governorate covered 42,017 km². The capital was Kamenets-Podolski (ukr. Kamjanez-Podilskyj ), from 1914 Vinnitsa (ukr. Vinnyzja ). It was divided into twelve circles ( Ujesdy ):

The area came under the Polish partitions of 1793 and 1795 to the Russian Empire, the governorate was formed in 1796 from areas of the Podolia and Bracław voivodeships . It existed as an administrative unit until 1925.