The green-leaved sulfur head ( Hypholoma fasciculare ) is a leaf fungus from the genus sulfur heads . The Latin name fascicularis describes the growth form and means "tufted" in German.

The hat reaches a size of two to six centimeters and is bright yellow to greenish in color. It is initially spherical, later spread out flat, with a hump in the middle, sometimes there is also a depression. The parting is a little darker, often tinged pale fox-red or orange-brown. The surface is usually bare and smooth, but can also be covered with pale velum fibers . There is often a membrane on the edge.

The close-up lamellae are initially yellowish, then greenish and finally olive-brownish in color and grown when ripe. Sometimes the mushrooms are sterile , with the lamellae appearing bright yellow in their basic color.

The stem is whitish to light yellow, darker towards the base, brownish, tinted. It is between three and eight or even ten centimeters long. Sometimes a weak, fibrous ring zone can be seen. The meat is predominantly yellow, the handle is more brownish in color and has a very bitter taste.

Inexperienced mushroom pickers can easily confuse it with the edible gray-leaved sulfur head , which has rather gray lamellas, white meat and a mild taste. The brick-red sulfur head , whose hat has a stronger, brick-red color, is similar . The stick sponge , whose handle is ringed, can also lead to confusion. 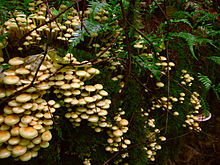 The green-leaved sulfur head is a widespread and common mushroom in the forests of Europe. It often grows in large clumps on dead hardwood and coniferous wood, especially on tree stumps; the substrate can also be buried so that it is not immediately recognizable as such. It is mainly found on pine and red beech wood . The fungus can be found between May and December, but can also occur in winter in mild weather.

The green-leaved sulfur head is important for forestry, since its mycelium feeds mainly saprotrophic as a wood breaker and only rarely shows wood-parasitic potencies. This may help reduce the spread of the Hallimasch in its area of ​​distribution. In addition to dead wood, this also affects living trees and causes them to die in a few years.

The green-leaved sulfur head is a toadstool . Its toxins ( fasciculoles ) affect the stomach and small intestine and cause vomiting and diarrhea ; However, permanent damage does not occur. Some time ago it was believed that the fungus was deadly poisonous because of the isolation of cytotoxic toxins that paralyzed mice and caused death. A similar effect on humans has not yet been proven. The earlier assertion that the green-leaved sulfur head contained poisons of the green leaf agaric was proven wrong.

In the laboratory, an extract of the green-leaved sulfur head shows an inhibitory effect on thrombin .