Contemporary painting of Marseille during the Great Plague

Public notice on the disposal of corpses during the Great Plague, 1720

The Great Plague of Marseille was the last major bubonic plague outbreak in Western Europe.

Interestingly, this population loss was quickly made good in just three or four years. This phenomenon is explained by the decline in mortality and the increase in the birth rate, linked to the increase in marriages, but mainly due to immigration from nearby regions (at the time the Alpes de Haute Provence department ) or from further afield. Immigration made up most of the losses. By 1765, the population was back to pre-1720 levels. Economic activity took only a few years to recover as trade expanded to the West Indies and Latin America .

City before the plague

At the end of the plague of 1580, the people of Marseille took drastic measures to try to control the future spread of the disease. The city council of Marseille set up a medical council, the members of which consisted of the city council and the city's doctors. The exact founding date of the body is not known, but its existence is first mentioned in a text from the Parliament of Aix from 1622. The newly established Medical Council made a number of recommendations for maintaining the health of the city.

In addition to protecting the city from external weak spots, the medical council tried to build a public infrastructure. It was also during this period that the first public hospital in Marseille was built, equipped with a full staff of doctors and nurses. In addition, the Medical Council was responsible for the accreditation of local doctors. Citing the numerous misinformation that spread during an epidemic, the medical council tried to provide citizens with at least a list of doctors who were believed to be credible.

The Sanitary Council was one of the first executive bodies formed by the city of Marseille. He was staffed so that he could support the growing responsibilities of the board.

The medical council set up a three-stage control and quarantine system . The members of the committee inspected all incoming ships and gave them one of three “health papers”. The “health certificate” then determined the degree of access of the ship and its cargo to the city.

A delegation of members of the Medical Council should inspect each incoming ship. They checked the captain's log , which recorded every city the ship had landed in, and compared it to the health department's main list of cities across the Mediterranean that had rumors of recent plague incidents. The delegation also inspected all cargo, crew and passengers, looking for signs of possible illness. If the team saw signs of illness, the ship was not allowed to land at a dock in Marseille.

If the ship passed this first test and there were no signs of illness, but the ship's itinerary included a city with documented plague activity, the ship was sent to the second stage of quarantine on islands off the port of Marseille. The criteria for the hospitals were ventilation (to dispel what was believed to be the miasm of the disease), proximity to the sea to facilitate communication and pumping out water for purification, and isolation and easy accessibility.

Even if the people on a ship were in perfect health, they had to be quarantined for at least 18 days at the location off the island. During this time the crew was housed in one of the hospitals that were built around the city. The hospitals were also classified in terms of health certificates for the ship and individuals. With a “clean” health certificate, a crew member went to the largest quarantine station, which was equipped with supplies and large enough to accommodate many ships and crews at the same time. If the crew was believed to be exposed to the possibility of an epidemic, they were sent to the isolated quarantine station set up on an island off the coast of the port of Marseille. The crew and passengers had to wait there for 50 to 60 days to see if they developed any signs of disease.

Once the crews were through their quarantine, they were allowed to enter the city to sell their wares and have fun before leaving.

Contemporary engraving of Marseille during the Great Plague

The great plague outbreak of 1720 was the last iteration of a bubonic plague pandemic after the devastating episodes that began in the early 14th century; the first known case of the bubonic plague in Marseilles was the arrival of the "black death" in autumn 1347.

In 1720 the Yersinia pestis from the Levant arrived in the port of Marseille with the merchant ship Grand-Saint-Antoine . The ship had departed from Sidon in Lebanon , having previously called at Smyrna , Tripoli and the plague-ridden Cyprus . A Turkish passenger was the first to be infected and soon died, followed by several crew members and the ship's doctor . The ship was refused entry into the port of Livorno .

When the Grand-Saint-Antoine arrived in Marseille, the port authorities immediately quarantined it in the hospital. Mainly because of the monopoly that Marseille had on French trade with the Levant, this important port had a large inventory of imported goods in the warehouses. He also expanded his trade with other areas of the Middle East and emerging markets in the New World . Powerful city merchants needed the ship's silk and cotton cargo for the great Beaucaire fair and pressured the authorities to lift the quarantine.

A few days later the disease broke out in the city. The hospitals quickly became overcrowded and residents panicked and evicted the sick from their homes and the city. There were mass graves dug, but they were quickly filled. Eventually, the death toll overwhelmed the city's ability to cope with public health care until thousands of bodies were scattered and piles around the city.

Attempts to stop the spread of the plague included a law by the Parliament of Aix imposing the death penalty on all communications between Marseille and the rest of Provence . To enforce this separation, a plague wall (mur de la peste) was built in the country . The wall was built of dry stone, 2 m high and 70 cm thick, with guards set back from the wall. Remnants of the wall can still be seen today in different parts of the Plateau de Vaucluse . 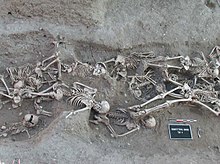 Bubonic plague victims in a mass grave from 1720 to 1721 in Martigues, France

In 1998 scientists from the Université de la Méditerranée unearthed a mass grave of victims of the bubonic plague. The excavation provided an opportunity to examine more than 200 skeletons from an area in the second arrondissement of Marseille known as the Monastery of Observance. In addition to the modern laboratory tests, archive documents were also evaluated in order to determine the conditions and dates of use of this mass grave. This multidisciplinary approach unearthed new facts and insights into the 1722 epidemic. The reconstruction of the skull of a 15-year-old boy provided the first historical evidence of an autopsy dated to the spring of 1722. The anatomical techniques used appear to be identical to those described in a surgical book from 1708.