Großpörthen is a part of the municipality of Schnaudertal in the Burgenland district (Saxony-Anhalt) belonging to the village of Wittgendorf .

Großpörthen is located in the north of the community of Schnaudertal, southeast of Zeitz. The Großpörthener Graben, a tributary of the Schnauder, rises in the village . 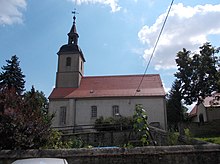 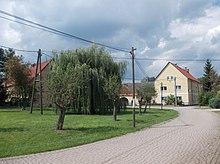 Großpörthen was mentioned as early as 1121, when the Vorwerk with 29 Hufen was given to the newly founded monastery Bosau near Zeitz . The transfer of the interest via the place to the monastery followed in 1504. Großpörthen was in the district of the court of the Roten Graben, which came to the Naumburg-Zeitz bishopric in 1286 . Großpörthen was in the Zeitz office until 1815 , which as part of the Naumburg-Zeitz bishopric had been under Electoral Saxon sovereignty since 1561 and belonged to the secondary school- principality of Saxony-Zeitz between 1656/57 and 1718 .

Through the resolutions of the Congress of Vienna , Großpörthen came to Prussia with the Zeitz office in 1815. The place was in 1816 the county Zeitz in the administrative district of Merseburg of the Province of Saxony allocated. After the dissolution of the Prussian province of Saxony (1815–1944), the administrative district of Merseburg became the province of Halle-Merseburg (1944–1945) on July 1, 1944 , to which Großpörthen in the Zeitz district now also belonged. After the Second World War , the place came to the state of Saxony-Anhalt.

Districts of the community of Schnaudertal