He held the honorary title of Commerce Councilor . 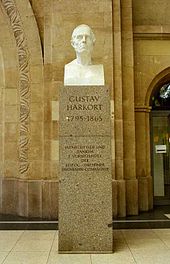 Gustav Harkort was the sixth of eight children of Brandenburg Hardware manufacturers and merchant Johann Caspar raking place IV. To house Harkorten born in Hagen. Among other things, he was the brother of the industrialist and politician Friedrich Harkort , the entrepreneur Johann Caspar Harkort V. and the mining engineer and officer Eduard Harkort . He attended the trade school in Hagen and after completing it did a commercial apprenticeship in his father's company. In 1813/15 he took part in the Wars of Liberation as a lieutenant in the Märkisches Landwehr Regiment .

After his father's death, Harkort went to Leipzig in 1820. Together with his older brother Carl Friedrich Harkort (1788–1856) he founded a company that operated forwarding and commissioning and traded in English yarns .

At the end of 1829 he directed the first preparations for the construction of the Magdeburg – Leipzig railway line .

On April 3, 1834, Harkort was one of the founders of the Railway Committee, which took up the concept for a German railway network from Friedrich List (1789–1846) and started the construction of the first line between Leipzig and Dresden ( Leipzig-Dresden Railway ) started. He was chairman of the board of directors of the Leipzig-Dresdner Eisenbahn-Compagnie from its foundation in 1835 until his death.

In 1856 Harkort co-founded the Allgemeine Deutsche Credit-Anstalt , of which he was also director.

Among other things, Harkort made a contribution to the development of the Neuschönefeld community . He left the local council of Neuschönefeld 500  thalers , the interest of which was to be distributed to the poor in Neuschönefeld every year on Christmas Day. In 1902 the foundation's capital was 1,750.50  marks .

On the occasion of the 25th anniversary of the complete completion of the Leipzig-Dresden Railway, he was made an honorary citizen of the city of Leipzig in 1864. In 1876 the Harkortstraße in Leipzig was named after him, as did the former Harkortbrücke (today a footpath over the Pleißemühlgraben at this point on the Federal Administration Report).

On July 9, 1878, a monument designed by the architect Carl Gustav Aeckerlein (1832-1886) with a bust created by the sculptor Eduard Lürssen (1840-1891) was inaugurated on the promenade in Leipzig in his honor . The Harkort bust was included in the List-Harkort monument created by Adolf Lehnert (1862–1948) in the facilities at the Schwanenteich in 1927 and stood there until 1960. Today the bust is at the west end of the cross-platform in the main station .