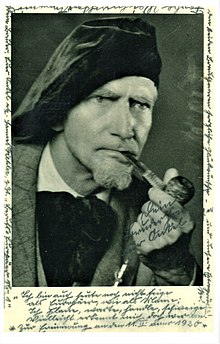 Hans Fiehler (around 1920):
Even today I am not a coward,
as a European or as a man.
I plan, wait, act, keep silent.
Maybe someone will recognize me after all.
Handwritten poem
(lower margin)

Hans Fiehler (actually Johannes Baptist Fiehler , also Hans im Glück ; born June 8, 1890 in Bayreuth , Upper Franconia ; † July 8, 1969 in Weinsberg , district of Heilbronn ) was a German painter , song poet and original pacifist , who singing, making music and painting sought to spread his vision of a “spring of nations” marked by peace. Unlike his brothers, who were enthusiastic supporters of Adolf Hitler very early on , he rejected National Socialism and saw himself as a European.

Card designed by Hans Fiehler (back)

Hans Fiehler was the second oldest child of the Baptist pastor Heinrich Fiehler (1858–1945) and his wife Emma, ​​née Wulff. He had four brothers and two sisters. Among them were the Hitler putsch participants Werner (1889–1952) and Karl , who later became the Nazi Lord Mayor of Munich. His brothers Otto (1892–1936) and Gerhard (1893–1950) were members and profiteers of the National Socialist movement.

The Baptist congregation in Bayreuth, the birthplace of Hans Fiehler, was his father's first office. Shortly after the birth of his second son Johannes Baptist (called Hans ), Heinrich Fiehler accepted an appointment from the Baptist community of Neuplanitz (today a district of Zwickau ) and stayed there with his family until 1894. Further moves followed: Braunschweig (until 1902) and Munich (until 1914). The parents then moved to Flensburg. Hans Fiehler initially stayed in Munich and then settled in Heilbronn , where he earned his living as Rudolf Kraemer's secretary , the “lawyer for the German blind” and chairman of the Württemberg Blind Association . An Art Nouveau art card designed by Fiehler originates from this period , which invited in Braille and printed letters to “ Flower Day 3 May 1914” in preparation for the International Blind Day in 1915 (see picture).

At the beginning of the First World War , Hans Fiehler was drafted into the Navy. He was promoted to battery chief in the coastal artillery in Flanders . A poem has come down to us from this period, which was printed in the war newspaper “An Flanderns Coast” and which praises the defensive strength of the German artillery against an enemy aircraft. The initial “nationalistic passion” with which Fiehler went to war gave way to severe disillusionment due to the realities of the war. Later he reported to the Bruderhöfer Johann Heinrich Arnold about a close combat in which he had killed his opponent. This event triggered strong feelings of guilt in him and "changed his whole worldview". Fiehler became a pacifist. He rejected political conditions that had been created by war and armed violence. Hence a protest action that he undertook against the Allied Control Commission in 1920 in Flensburg , the last place where his father worked . He exchanged the British Union Jack and the French tricolor that were blowing on the police headquarters for the German and Schleswig-Holstein flags . The "flag swap" was discovered and reversed. A permanent armed flag guard was ordered and while Hans Fiehler remained undetected, the city of Flensburg had to pay a heavy fine.

Hans Fiehler left Flensburg and led an "adventurous hiking life". During these years, the contact point was always the Sannerzer domicile of the New Hutterite Bruderhof movement. Emmy Arnold, the co-founder of the Bruderhof, described his peculiar appearance: “He had a red pointed cap, shorts and a red vest with 'Hans im Glück' written in capital letters on the back”. He also carried an Italian violin and a sheet metal violin with him, as well as four ocarinas , which he called "great-grandmother, grandmother, mother and child" - presumably in order of their age. One picture shows that he was transporting his belongings in a handcart. He preferred to show up at the Bruderhof at night and announce his arrival by playing on one of his ocarinas. After the door was opened for him, he always introduced himself with the same words: "I am Hans in happiness and I am looking for peace between the peoples!"

During his wanderings through towns and villages, it was mainly the children who were the first to hear his "messages of peace". With his speeches and songs suitable for children, he tried to give his young listeners a new perspective on the future. Most of them were war children, some of them were orphans. They had not only experienced hunger and deprivation during the war. He therefore told them contrasting stories "of the future of human beings and all creatures and that one day the whole earth would be heaven". You should therefore not look back, but look ahead. In order to practice this gaze directed at the future, they would have to fix the time and date not to the past, but to the future; they should no longer say: “20 past four, but 40 to five”, no longer “1925 (after the turning point), but 75 years before 2000” and so on. The ritual end of these events was always the Sunday school song written by Fanny Crosby (1820–1915) : Let hearts always be joyful and filled with thanks. Because Heavenly Father calls us his little children! [...] . Not only his appearance should draw attention, but also some pranks that he sometimes played to annoyance on the one hand and to joy on the other on his fellow human beings. He proposed to a general who was accused of complicity in the lost war, that the goulash cannons should be fetched from the barracks and brought into town. A large-scale feeding of the poor would definitely restore his lost reputation. He would then also be there with a camera to photograph the action and then make the images available to the newspaper. The general agreed to this and even served the numerous people who appeared personally when the food was distributed the next day. When he asked for the exposed film from Hans Fiehler after the action, he showed the empty camera and apologized with the words: “I must have left the film at home!” While the general and his team reacted with violent anger, Fiehler had the crowd on his side.

Hans Fiehler earned his living with odd jobs and probably also with art painting. Presumably he also received donations during his public appearances as "Hans im Glück". All that is known so far is that he worked as a tourist guide and souvenir seller in the Harz Mountains during a summer in the early 1920s . He had also leased an observation tower that could be climbed for a fee. Now and then, Fiehler was forcibly committed to psychiatric institutions (then called “insane asylums”) for a short or long period. With the beginning of the Nazi era, his stays in these institutions increased. According to the Munich address books of the 1930s, Fiehler lived on the second floor of Konradstrasse 2 in 1935 and, from 1940, on the first floor of Willroiderstrasse 10 . His parents Heinrich and Emma Fiehler spent their twilight years there. The building was the so-called "Tannhof", the guest house of the city of Munich and the residence of the mayor. In the last years of the Third Reich, Hans Fiehler lived under one roof with his brother and his family, as well as with his parents. It is not yet known where he spent the following years. He lived in Heilbronn by 1964 at the latest . His last address was Bahnhofstrasse 20 in Weinsberg, where he died at the age of 79.

Hans Fiehler was married twice. On May 28, 1925, he married the businesswoman and later alternative practitioner Helene Friederika Innerbener in Freudenstadt . The marriage ended in divorce in 1937. She had a daughter: Maria Anita Nirwana (1925–2013). His second marriage was in Weinsberg with Anna Obermayer. She died on October 12, 1965.

Hans Fiehler wrote, composed and improvised incessantly. Some of his songs found their way into various collections, some even in the Sonnenlieder , the Bruderhöfer's hymnbook , or in their English counterpart, the Songs of Light .

Here is a selection of the better-known Fiehler songs: