The marriage theorem , or Hall's theorem , named after Philip Hall , is a mathematical theorem from combinatorics or from the theory of finite sets from 1935. It is the starting point of the matching theory in graph theory . 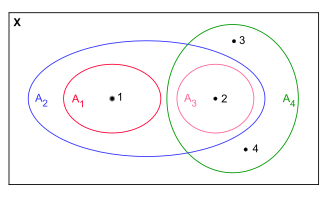 The sets violate the Hall conditions, since their union contains only 2 elements.

Given are a natural number , a finite set and a finite number of subsets of , which do not necessarily all have to be different. Then the question is:

Is there a "representative system" ( English system of distinct Representatives ), that is, elements such that all are different?

Given a finite index set and a family of finite sets. Then the question is:

Exists for an " injective selection function "

so that applies to all ?

The following interpretation led to the widespread term marriage sentence :

Then the question is:

Can women marry men in such a way that every woman marries one of the men she is friends with without violating the monogamy rule? An illustration of the marriage rate is found in the article by Konrad Jacobs in the Selecta Mathematica I .

Such a marriage requires that every woman choose a man to marry without two women marrying the same man. This must apply not only to all women, but also to any subset. So it is obviously necessary that women are always friends with at least men.

This means: for every subset there must always be at least elements in the union .

The existence of a selection of the type required we exactly get the following necessary condition, which is also called the Hall condition or hallsche condition ( english Hall's condition is called):

For each subset is .

The marriage theorem now states that the Hall condition for the existence of a selection is not only necessary but also sufficient:

There were , and as described above. Then the following statements are equivalent:

A direct proof can be given by induction on the number of sets . Such proof can be found in the Proofs from THE BOOK by Martin Aigner and Günter Ziegler . The sentence can also be traced back directly to Dilworth's theorem . As can be seen, the marriage theorem , the Dilworth theorem and the König theorem can easily be derived from each other.

The blue edges form a matching in which all nodes from A occur.

Hall's marriage theorem can be represented graphically as follows. Let it be a bipartite graph with bipartition . A matching is a set of different edges that no nodes of the graph have in common. For a subset, let the set of all points that are adjacent to, which are necessarily a subset of because of bipartism . The question of a matching in which all nodes occur is the question of a selection of pairs of different nodes for all of them . The marriage rate in this context is:

For a bipartite graph with bipartition , the following statements are equivalent:

Whether such a matching exists can be answered with the help of the network flow model .

In the literature on the marriage rate there are a large number of generalizations and expansions under different conditions:

Generalization according to Philip A. Ostrand

This generalization ( theorem of Ostrand ) tightens the marriage rate in such a way that a lower bound is given here for estimating the number of representative systems with which the marriage rate results directly:

Let a natural number and a finite family of finite sets be given. This is arranged in ascending order in the following sense :

The number of representative systems of will be denoted by.

If the Hall condition is met , then

The connection to the marriage rate results from the observation that applies to throughout . Ostrand's theorem says in particular that if the Hall condition is valid, the number of substitute systems must be at least , so that in this case a substitute system exists.

As the Dutch mathematician Jacobus Hendricus van Lint was able to show, the above limit is the best possible if only the numbers are known.

Generalization according to Rado

This generalization, which goes back to Richard Rado , connects the marriage theorem with matroid theory . The starting point here is the following question:

Under what conditions does a “representative system” exist for a given matroid and a given finite family of subsets such that the subset is “independent”?

Such a subset is also called an "independent transversal".

In a nutshell, the question in question should be asked as follows:

Under which conditions does a given matroid have an independent transversal for a given finite family of subsets ?

The answer to this question is given by Rado's theorem , which says:

has an independent transversal if and only if the inequality is satisfied for each subfamily .

Extension to the infinite fall

There are extended versions of the marriage theorem and Rado's theorem (and also of Dilworth's theorem ), which (among other things) include the case that the basic set is infinite . The proofs of these transfinite versions , however, usually use Zorn's lemma or Tychonoff's theorem as a decisive aid, i.e. start from the axiom of choice .

Wikiversity: A Proof of the Marriage Theorem in a Discrete Mathematics  Course - Course Materials