A matroid ( n. ) Is a mathematical structure that is used to generalize the notion of independence from linear algebra . It represents a special case of the more general independence systems . Matroids have applications in many areas of combinatorics , in particular combinatorial optimization , as well as graph theory .

Hassler Whitney used the term matroid in his seminal article in 1935. As the word suggests, he conceived a matroid as an abstract generalization of a matrix , with the Greek suffix -oid completing the term. Much of the language of this theory is based on linear algebra. However, Whitney's approach is also based on his work in graph theory, which means that Matroid terminology is also shaped by graph theory. However, the terminology varies from author to author. Even the term matroid is rejected by some. Leonid Mirsky and Hazel Perfect use the expression “independence space”, Henry H. Crapo and Gian-Carlo Rota in their monograph on combinatorial geometry “pregeometry”, Richard Rado “independence functions “(Eng. Ie independence functions) and Paul Cohn “ transitive dependence relation ”(Eng. I. E. Transitive dependency relation). According to Martin Aigner , the term matroid emphasizes the set- theoretical point of view more strongly, while embossing geometry is mainly used by those authors who put the geometric aspect in the foreground.

The mathematician Hassler Whitney , who introduced the term matroid

The mathematical structure of a matroid was introduced and further developed by several authors in the 1930s. The aim was to axiomatize well-known terms from linear algebra such as linear dependency , basis and product and to transfer them to more general structural classes. This enables a more precise concept formation in different areas of combinatorics and makes purely combinatorial questions accessible to algebraic ideas and methods. For example, graph theory can be included in the theory of matroids.

As a rule, the beginning of the matroid theory is attributed to the American mathematician Hassler Whitney. In 1935 he investigated matrix matroids in which the elements of are the rows of a given matrix, and a set of rows is independent if the rows are linearly independent in the usual sense. A little later, Bartel Leendert van der Waerden also used the concept of abstract dependency in his book "Modern Algebra". Separately , the Japanese mathematician Takeo Nakasawa wrote four articles between 1935 and 1938 that made him a co-founder of the matroid theory, even if these were long forgotten.

In addition, there were isolated articles by Garrett Birkhoff (1935), Saunders Mac Lane (1936) and Robert P. Dilworth (1941–1944) on association -theoretical and geometric aspects of matroid theory. Richard Rado dealt with combinatorial applications of matroids (1942) and infinite matroids (1949). An important impetus for the further development of the theory of matroids was the alternating adoption of ideas from different areas and their effects in others, such as the parallelism between the properties of the dimension in vector spaces and the rank in graphs . In 1958 and 1959, William Thomas Tutte published basic articles on matroids and graphs. Since then, interest in matroids and their applications in combinatorics has increased steadily, not least in the area of combinatorial optimization . Jack Edmonds and Delbert Ray Fulkerson (1965) as well as Leonid Mirsky and Hazel Perfect (1967) independently discovered a new class of matroids, so-called transversal matroids. According to Welsh, matroids have so far achieved the greatest effect in transversal theory (measured in terms of new results that have been achieved and simpler proofs that have been found for already known results).

Example of a vector matroid

The basic set E is given with the vectors a, b, c, d, e, f. The sets with the zero vector f and the sets that contain the vectors d and e together are linearly dependent.

Let be a field , a - vector space and a finite subset . Let be defined as the set of subsets of which are linearly independent over . Then the pair is a matroid called a vector matroid.

For example, let the vector space and the columns of the following matrix be given as the basic set :

The corresponding column vectors are denoted as follows:

This results in the basic amount and the amount

of the vector sets with linearly independent vectors.

In contrast, the vectors in vector space are linearly dependent if one of the following conditions is met:

Correspondingly, a zero column and scalar multiples or their indices are dependent in a matroid.

For a matroid the bases are defined as the elements of maximal inclusion of . For a vector matroid these are exactly the bases of the vector space . In this example, the following applies:

Example of a graphical matroid

Let be an undirected multigraph (i.e. multiple edges and loops are possible) with node set and edge set . The graphical matroid contains as independent sets the circle-free subgraphs of .

As an example, the graph is the vertex set and the edge set , keeping the edges by the following multi-sets are defined .

In this example, the circular subgraphs correspond to independent sets .

The bases of a graphical matrix correspond to the spanning forests of the graph (or the spanning trees in the case of connected graphs). The following applies to the example:

There is no standard axiom system in matroid theory . Whitney already noted in the basic article that different structures in the matroids offer themselves for axiomatization . Since one structure implies the other, a matroid can be defined in many different equivalent ways. The axioms of independence are more motivated by linear algebra, while the axioms of circles are more based on a graph-theoretical approach. Birkhoff introduced the term cryptomorphism for such an equivalence of different axiomatizations . This is to say that two axiomatizations are "isomorphic" in a non-obvious or even cryptic way.

A matroid is an ordered pair consisting of a finite set , called a basic set, and a set of subsets ( set system ), called independent sets, which satisfies the following axioms:

It is the cardinality of the set and means the difference of the sets and . Often one also writes for and for , especially when several matroids are taken into account. The amounts from are called dependent.

The first axiom says that the empty set is independent. According to the second axiom, every subset of an independent set is also independent. It is also said in this regard that the set system is hereditary or hereditary. The unique selling point of a matroid compared to a normal independence system is the exchange property, i.e. the third condition. While the first two axioms can easily be understood as demands the existence of at least one independent set and the closure of the system with regard to inclusion , the motivation for the exchange property is less obvious.

This can be illustrated as follows: By applying the exchange property, points of an independent set can be added to a (smaller) independent set . Therefore it is also called the magnification feature (of English. Augmentation property ). We know from the quantity generated in this way that it is also independent again. It now contains elements of the set , but compared to this, the remaining points contained have been replaced by elements from . This in turn justifies the name exchange property .

A basis is a maximum element of the system of amounts with regard to the amount inclusion . A matroid can be specified more efficiently by a set of all maximally independent sets than by listing all independent sets.

For a basic set and a set of bases, the ordered pair is a matroid if the following axioms are satisfied:

(B2) For bases and from and each there is a such that .

Condition (B2) is also called Steinitz's generalized exchange theorem. Given the bases of a matroid, the independent sets can be derived as the set of all subsets of bases .

Proof: Suppose that . Since and are both independent in , (I3) implies that there is an element out such that . This contradicts the maximality of , so . In the same way it can be shown and it follows 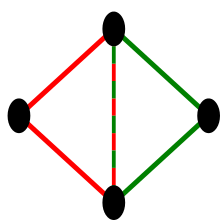 Axiom C3: The union of (red) and (green) contains a circle that does not contain a common edge (red-green dashed).

A minimum dependent subset of any matroid is called a circle. The set of circles is denoted by or . So a circle is not independent, but every proper subset of is independent. A circle with n elements is also called an n-circle. Obviously, from be determined and vice versa from .

For a basic set and a set of circles, the ordered pair is a matroid if the following axioms are satisfied:

The minimally dependent subsets of a matroid always form a circle system. This becomes particularly clear in graphical matroids, since there the elements contain the circles of the underlying graph, from which the name comes. The property (C3) is also called the (weak) axiom of circle elimination : For every two different circles and and one element from the intersection of these two circles, there is a third circle , which is contained in the two circles and and the selected element from the intersection avoids.

Axioms of the rank function

Be a matroid and . Now be defined as . The couple are again a matroid. This is called a restriction of on and is marked with or . It is also said that it is deleted.

For a matroid , its rank function is defined as

With the help of rank functions, another equivalent axiom system for matroids can now be developed. Let it be a matroid and its rank function, then:

The rank function is thus non-negative and subcardinal (R1), monotonic (R2) and submodular (R3). The last property is also reminiscent of the dimensional formula from linear algebra.

Independent sets, bases and circles can be characterized relatively easily by the rank function. Be a ranked matroid and be . Then applies

Axioms of the Hull Operator

The envelope operator (also known as the closing operator) is used to mark those elements of a matroid that do not change the rank compared to a subset after adding one of the elements:

The envelope operator of a matroid on a base set now has the following properties:

A weighted matroid is a matroid with a weight function . Greedy algorithms always calculate bases with minimum or maximum weight for these matroids . One example is Kruskal's algorithm for calculating a minimal forest spanning an edge-weighted graph .

Conversely, an independence system is a matroid if and only if a greedy algorithm can always calculate bases with minimum / maximum weight for every weight function.

An important connection between matroid theory and geometry and above all between matroids and finite geometric structures can be found in the concept of the hyperplane . Here, within a matroid above the basic set as a hyperplane, a real subset of closed under the associated envelope operator is designated , which is maximal with regard to this property .

A hyperplane of is characterized by two properties:

In the case of matroids of finite rank , whose base sets all have the same finite cardinality , there is also a further description of the hyperplanes , which makes the connection with the hyperplane concept of geometry obvious. According to this, a hyperplane of a matroid can be characterized as a maximum subset of the rank . Because of this connection, the term copoint is also used in addition to hyperplane .

The hyper-levels of a matroid clearly define its structure, since they are linked to the circles of the dual matroid in a reversible manner by forming a complement . In this way one finds that matroid structures can also be determined by hyperplane systems , i.e. by systems of subsets that satisfy the following hyperplane axioms.

A subset system forms the system of hyperplanes of a matroid over the basic set if and only if it satisfies the following conditions:

The first two conditions state that an anti- chain represents the inclusion relation, which consists of pure subsets of . The third axiom formulated a kind of coverage condition (English covering condition )