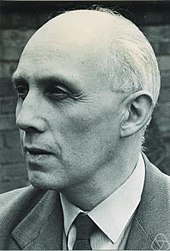 Richard Rado (born April 28, 1906 in Berlin ; † December 23, 1989 in Reading ) was a German mathematician who mainly dealt with combinatorics . He is not related to the Hungarian mathematician Tibor Radó .

Rado, whose father came from Budapest, wavered between studying mathematics and a career as a concert pianist. He first studied mathematics in Berlin and Göttingen and received his doctorate in 1933 under Issai Schur ( studies on combinatorics ). In the same year he emigrated to Great Britain after the National Socialists came to power in Germany . There he continued his studies in Cambridge (Fitzwilliam House) on a scholarship, where he was influenced by GH Hardy , JE Littlewood , Bernhard Neumann , AS Besikowitsch and Philip Hall . In 1935 he received his doctorate for a second time under Hardy ( Linear transformation of bounded sequences ). He also came into contact with Harold Davenport and Hans Heilbronn . A number of works on combinatorics and graph theory were produced together with Paul Erdős , whom he first met in Cambridge in 1934, where Rado was a lecturer. Rado went to the University of Sheffield in 1936 , where he was colleague and friend of Leonid Mirsky , and moved to King's College in London in 1947 , before taking up a chair at Reading University from 1954 until his retirement in 1971 .

With Erdős he founded the partition calculus in the Ramsey theory , see Erdős-Rado theorem . As early as his dissertation in 1933, he dealt with questions related to the Ramsey theory, based on Van der Waerden's theorem . He also dealt with graph theory (where the Rado graph or random graph is named after him), Philip Hall's marriage theorem and the theory of matroids ( Rado's theorem ). Erdős described their collaboration in such a way that he himself was good at discovering interesting special cases, while Rado generalized them to be as effective as possible.

In his honor, the mathematicians' prize awarded every two years by the Discrete Mathematics section of the German Mathematicians Association is named: the Richard Rado Prize for the best dissertation in discrete mathematics.

In 1972 he received the Senior Berwick Prize and in 1978 he became a Fellow of the Royal Society . In 1981 he received an honorary doctorate from the Free University of Berlin . In 1974 he was invited speaker at the International Congress of Mathematicians in Vancouver ( Families of Sets ) and also in 1936 ( Some recent results in combinatorial analysis ), 1962 ( A theorem on vector spaces ) and 1954 ( A Partition Calculus ).

Since 1933 he was married to Luise Zadek, with whom he had a son. Both of them also performed publicly in musical events, with his wife singing and he accompanying on the piano.

His PhD students include Eric Milner and Gabriel Andrew Dirac .