Ignaz Reiser was born in 1863 as the son of the Jewish wholesale wine merchant Moritz Reiser and his wife Theresia Reiser, b. Weissmann was born in the municipality of Magyarbél in the then Hungarian part of the Austro-Hungarian monarchy (now Slovakia ). He grew up in Pressburg and Vienna . After attending secondary school , he studied from 1883 to 1892 at the Vienna University of Technology (among others with Karl König ) and in Budapest (degree unknown).

From 1892 to 1896 he worked as a trainee with building officer Wilhelm Stiassny . He then worked as a freelance architect in Vienna and worked on residential and commercial buildings as well as on community buildings for the Israelitische Kultusgemeinde Wien . He passed the civil architecture exam in 1937 and was a member of the Chamber of Engineers for Vienna, Lower Austria and Burgenland from 1937 to 1940 . The studio was located at Vereinsgasse 16 in Vienna's 2nd district (Leopoldstadt).

Since 1896 he was with the butcher's daughter Rosalie Lustig, nee. 1868, married. With her he had two sons, Otto b. 1898 and Robert born 1890, and a daughter, Margit b. 1901. He died in 1940 in the Rothschild Hospital in Vienna because of cancer . His wife initially survived him, but was then deported to Theresienstadt concentration camp in 1942 and murdered in the Maly Trostinez extermination camp that same year . His children fled to the USA . 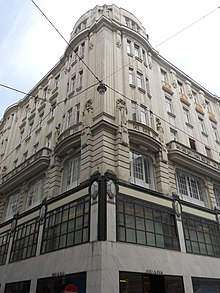 Reiser was shaped by late historicism . His most recent buildings were in the neo-baroque style, later he was based on functionalism . Many of his buildings were torn down or destroyed during the National Socialist era . The memory of its importance at the beginning of the 20th century was almost erased by the Nazi regime.