The Indian Institute of Astrophysics is an astrophysical institute in India . The head office is in the Koramangala district in Bengaluru . An establishment of the Institute, the Center for Research and Education in Science and Technology (CREST), is located in Hosakote ( 14 ° 16 '47 "  N , 77 ° 10' 48"  O ). The institute is administered by the Department of Science and Technology of the State of India. 14.279722222222 77.18 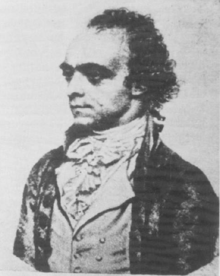 Several astronomical observatories in India are supervised by the institute . 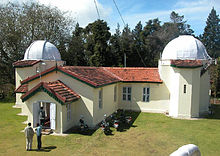 The Kodaikanal Observatory is located in the Palani Mountains in southern India. It was established as a solar physics observatory in 1899, and all Madras activities have been relocated there. The 20 cm refractor is still occasionally used today to observe comets and occultations , at other times it is open to visitors.

The observatory has an astronomy museum in which, among other things, a current image of the sun and the associated Fraunhofer spectrum are shown. It also has a library with historically valuable books.

The Vainu Bappu Observatory, or “VBO” for short, is located in the Javadi Mountains at an altitude of 700 m near the village of Kavalur in the Indian state of Tamil Nadu , 175 km southeast of Bengaluru . It is named in honor of Vainu Bappu (1927–1982), President of the International Astronomical Union , who was committed to astronomy in India. 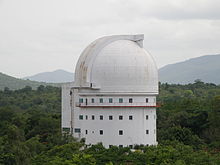 The building of the 2.34 m telescope

An ongoing research goal is the observation of stars , star clusters , novae , supernovae , blazars , galaxies , the imaging of gamma-ray flashes , star populations , objects in the solar system and various others.

The 1 m telescope made two special discoveries in our solar system. In 1972 it was found that Jupiter's moon Ganymede had an atmosphere , and in 1977 rings were first observed on the planet Uranus .

On February 17, 1988, a planetoid was discovered with a 45 cm Schmidt telescope . It was named " 4130 Ramanujan " after the outstanding Indian mathematician S. Ramanujan . The Minor Planet Center has assigned the VBO the observatory code 220.

Many stars of the Large Magellanic Cloud could be spectroscoped with extremely low dispersion . Ten Novae were examined, as well as the Supernova 1987A .

The Gauribidanur Observatory has a number of radio astronomy instruments:

In addition, it is involved in projects outside of India:

The Indian Astronomical Observatory is at an altitude of 4500 m and is one of the highest observatories in the world. It is located in Hanle , Changthang , Ladakh , north of the Western Himalayas . The high location and the low water content of the atmosphere due to the climate of the region allow excellent observation possibilities in the optical, infrared, submillimeter and millimeter range.