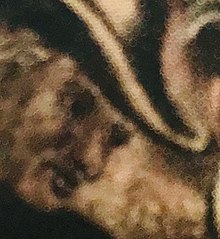 Innocent Anton Warathy (also appears as Warathi, Waräthy, Waräthi, Barath, Barati and other spellings) (* 1694 in Trens near Sterzing , † December 8, 1758 in Burghausen ) was a Baroque painter resident in Burghausen and from 1725 to his Death member of the city council.

The register of the parish of Stilfes , to which Warathy's place of birth belonged, names November 24th 1694 as his baptism date. Since children were baptized immediately after their birth at this time, this should also be Warathy's birthday. Warathy learned the painter's craft from his father Elias, who mainly worked as a barrel painter . It was considered that Warathy belonged to the workshop of Wolfgang Andreas Heindl for some time , as both worked for the Bavarian monastery of Metten around 1720 . As far as we know today, the frescoes in the Metten monastery library are Warathy's first independent work. After working in Metten, Warathy went to Burghausen , where he applied for one of the two painter justice after the death of the Burghaus painter Franz Josef Kamerloher. He presented a sample painting, which, according to the city council, was said to have been "pahsabl ... whether it was already faultless". He received civil rights and on October 24, 1724, married the daughter of the probationary administrator in Mattinghofen, Maria Cäcilia Mähninger. With her he had four daughters and a son. Two years later he acquired the house in den Grüben 153. From 1736 he was a member of the city's external council and one year later of its internal council. He later became city ​​governor . After the death of his wife in 1751, Warathy married his second wife Maria Franziska in the same year. Shortly before his death, he tried in vain to prevent the award of the second Burghausen painter justice to Johann Nepomuk della Croce in favor of his future son-in-law Johann Martin Seltenhorn. Warathy died on December 8, 1758. Seltenhorn then succeeded him.

According to Peter Becker, typical of Warathy's works are "distinctive, pronounced faces, often with strong noses, beautiful, but not in the sense of pretty, some with exaggerated, almost caricature-like physiognomies."

Ceiling fresco in the pilgrimage church of Our Lady in Großgmain