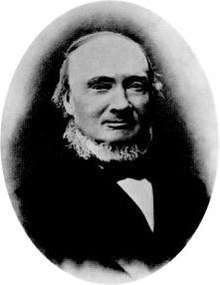 He was the youngest of eight siblings, the parents were poor tenants. His mother Guri died when he was three years old. When his father died in 1826, brother Jon took over the business. Ivar had a lot of field work to do. The generally accessible library of Sivert Aarflot was three kilometers away . In 1831 Aasen became a primary school teacher in his hometown. This gave him the opportunity to visit what was then the cultural center in Volda , where there was an even larger library. Two years later he came to the household of Pastor H. C. Thoresen on Herøy , who gave him thorough instruction in all subjects (including Latin). In 1835 he became tutor for the six children of the captain Ludvig Daae in Solnør in the municipality of Skodje near Ålesund . He stayed here for seven years. During this time he acquired a great deal of knowledge in Latin, German, English, grammar, literature, geography, history and botany. His occupation with botany - he had a collection of 500 plants - and with grammar was particularly intense. In 1840 Aasen moved to the pastor P. V. Deinboll in Molde , and in 1841 to Bishop Jacob Neumann in Bergen . In 1840 he went to Trondheim and went on several research trips. He then came to Christiania (now Oslo) and received a lifelong scholarship that earned him the salary of a professor. He refused the office itself.

Ivar Aasen was a dedicated botanist. He had 506 plants in his collection, which he had put together in Sunnmøre from 1837 to 1839 . Originally he was known more as an eminent botanist. His plant collection was one of the largest in the first half of the 19th century. The valuable thing about the collection is that it is an inventory for a precisely defined area, namely Ørskog and Skodje. Despite the inadequate literature on the identification of plants, he managed to classify them in the Linnaeus system . In 1841 Aasen gave up this job because of the research grant for the Norwegian language. But the interest never died. So in 1860 he wrote an article Norske Plantenavne (Norwegian plant names ).

In 1836 he made the plan for a Norwegian written language in a small essay "Om vor Skriftsprog" (About our written language). In 1837 he published a dictionary of his native Sunnmøre dialect. A few years later he wrote a grammar on the Sunnmøre language. He took this with his plant collection to Bishop Jacob Neumann, who showed great interest in grammar and published parts of his work in Bergens Stiftstidende in 1841 . The bishop contacted Frederik Moltke Bugge in Trondheim, the president of the Kongelige Norske Videnskabers Selskab . In Trondheim he received a research grant to study the Norwegian dialects. To do this, he traveled all over the country for four years until 1847. In 1848, according to his appreciation for Old Norse, dialects were ranked according to their similarity to Norrøn . Thereafter the dialects in Hardanger , Voss and Sogn took the lead; the core area of ​​the Nynorsk is located here to this day . He wrote the few letters and the diary (both only published between 1957 and 1960) in Danish, and a few in his own language, Landsmål. He wrote several small books. The longest text he wrote in Landsmål is Heimsyn: ei snøgg Umsjaaing yver Skapningen og Menneskja: tilmaatad fyre Ungdomen (View of the World: A Brief Overview of Creation and Man, Prepared for the Young, 1875). It is 96 pages long and has hardly been read.

His efforts in the Norwegian language were influenced by Henrik Wergeland and were initially an experiment with a new form of Norwegian written language: Samtale mellem to Bønder (Conversation between two farmers) from 1849, published by the conservative newspaper Morgenbladet . This was preceded in 1848 by Det norske Folkesprogs Grammatikk (The grammar of the language of the Norwegian people). Det Norske Folkesprogs ordbog (The Dictionary of the Language of the Norwegian People) was published in 1850 . The work contained more than 25,000 words. The great historian Peter Andreas Munch called it a national masterpiece. The first text in Landsmål was Prøver af Landsmaalet i Norge (Samples of Landsmål in Norway, 1853). In 1873 his revised Norsk Ordbog (Norwegian dictionary) appeared.

In Ivar Aasen's time, the norrøne period was expected to have a single language for the whole country. However, later research showed that there were many dialects even then. Many words that Ivar Aasen had discarded as danisms turned out to be old and original Norwegian words.

Ivar Aasen was of the opinion that the more archaic the language, the truer and better it was, which was very much in keeping with the national romantic zeitgeist of the upper class , which Herder had shaped. Others, however, felt that it was unsuitable for reproducing modern ideas. Peter Andreas Munch wrote of grammar that it was a work of national importance that the entire nation could be proud of. It reveals the Norwegian nationality of the people more clearly than any other work that has appeared. About the dictionary he wrote that it was a national monument, the author of which every Norwegian patriot owes the greatest thanks.

Aasen was first celebrated by the educated upper class; his books sold very well. Bjørnstjerne Bjørnson tried to develop the new language. There were soon writers who wrote texts in this language. But none of them saw it as more than a starting point. In 1858 there were three authors of texts in Landsmål, each with their own language version. The texts were not in the same language and so no one could understand them who did not have a reasonable command of Norrøn . In 1858 a newspaper asked Aasen to translate the Icelandic Fridtjofs saga . He did this in his personal Landsmål. Out of consideration for its readers, the newspaper did not give him any more assignments. After 1860 national romanticism declined noticeably. Aasen's books no longer sold; in fact, every now and then they even failed to announce and discuss them. The newspaper in which he had published Fridtjof's saga changed sides and went over to the language reform of his opponent Knud Knudsen , as did several writers, including Bjørnson, for whom the language was too difficult. For others (according to the historian Munch) it was later not archaic enough because Aasen had refused to use grammatical forms that had survived in few or no dialect. Other poets used Landsmål, but very freely, much to Ivar Aasen's discomfort, such as Arne Garborg .

He was neither an organizer nor could he promote his ideas. The Nynorsk movement emerged largely without his involvement. The later spelling reforms did not adopt all of his grammatical principles, but turned to the more modern dialects and simplifications in the direction of Bokmål. For the history of science in dialectology , Aasen is an outstanding figure that has so far been underestimated. His grammars and dictionaries were written at a time that preceded the boom in local grammar publications triggered by young grammarians .

The Ivar Aasen-tunet (www.aasentunet.no) has existed in Ørsta since 2000 as a large-scale documentation and experience center with a museum and library.

At the Høgskule in Volda near Ørsta there is the Ivar Aasen-instituttet for språk og litteratur; it is used for research and study purposes.

In the Ivar Aasen hage (garden) within the Blinder campus of Oslo University there is a bust of Aasen, made by the sculptor Dyre Vaa . Another monument shows him sitting inside a traffic circle in Ørsta.

Ivar Aasen's grave is on Vår Frelsers Gravlund in Oslo.